The by-election is on Thursday 4 April but sadly there will be no candidate from the Socialist Party standing. However, we can put forward our case for socialism.


Then why vote for a capitalist politician?


Since the last election capitalism has become a dirty word again. The world over, people are protesting against the profit system's effect on the environment, poverty and on quality of life generally. There have been anti-capitalist protests in Britain too. Maybe you've taken part in them, but what to do in the coming election?


Vote Labour—you must be joking!


They are as committed to the profit system and to serving the interests of Big Business as the Tories. Labour has never aimed at anything more than managing capitalism.
Vote Plaid Cymru?
They wish a separate Welsh state but the solution lies not in nationalism, which is a delusion and a snare, but in world socialism. The Socialist Party rejects allegiance to any State and regard themselves as citizens of the world.


But what about those calling themselves left-wing socialists?


Their programme doesn't even go beyond private capitalism. "Tax the Rich and Make Them Pay" sounds anti-capitalist, but it assumes that the rich continue to exist. It's the old illusion that you can use taxes and government intervention to make capitalism work for everybody's benefit.


For them, it is just a tactic to get disillusioned Old Labourites to join their ranks.


So, if we can't vote for any of these parties, what's left? Not voting at all? More and more people are doing this, and it's not as bad as voting for one of the capitalist parties. It's a cop-out, though. The fact that up to now the vote hasn't been used properly is no reason to reject it as useless.


We suggest something else: a write-in vote for Socialism. Real socialism, not the state capitalism that failed in Russia, but a leaderless society; where there's common ownership and democratic control of production; goods and services are produced for use not profit; and the principle "from each according to their abilities, to each according to their needs" applies.


Our idea is a world without frontiers in which the natural and industrial resources of the Earth become the common heritage of all humanity and are used to provide enough for everybody in an ecologically sound way.


We think that the election system could be used in a constructive way we shall be exercising our right to vote. We shall be casting a write-in vote against capitalism by writing "WORLD SOCIALISM" across the ballot paper. If you don't want capitalism, why not do the same? 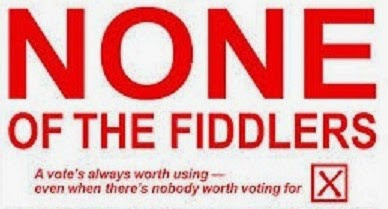 Posted by ajohnstone at 9:58 am