Capitalism is killing the planet

Recently there has been many heated arguments (pardon the pun) over global warming. The pervading sense of doom is not unfounded. Far from it. We face real threats. The young around the world understand the peril which they will inherit and on the 15th of March many intend to challenge the status quo in the hope that they can mitigate the effects of climate change.
Our choice is the end of capitalism or possibly the end of the world. Progressive politicians have embodied the hopes of so many environmental activists and made so many promises to mitigate the menace of climate change with regulations on fuel efficiency, carbon emissions and renewable energy sources. In truth, they have accomplished very little except to make more pledges for the future. What reforms that have been passed, have come without treading on the power, profits and prerogatives of the corporations. The results are all too evident. Many of the acclaimed achievements have been reversed by new governments. Some people never learn. They keep believing politicians and their promises. We have to finally realise that they are ALL the same! They represent the 1% and only the 1% What the world needs is to transform itself - not reform itself. Politicians don’t do their jobs because they were bribed, or complacent, or powerless, or all three? The very power and wealth of the corporations, which make regulation necessary, are precisely what undermines regulatory rules and laws. The story has repeated over and over again. Government regulation can offer only bandaids for a cancerous growth.


The scientific evidence is that climate change threatens the world with environmental and humanitarian catastrophe. The political evidence is that our rulers are gambling with humanity’s future for the sake of profit. Without a fundamental restructuring of the economic system we are at the brink of barbarism, exemplified by civil wars, famine, drought, disease and many maladies we can only imagine. It is time to act. If the last 100 years or so have been a disappointment for the Socialist Party, at least we are still around to pass on some of the lessons to the next generation. The mainstream environmental organisations seem unable to learn the political lesson being taught to them, and continue to hope that politicians will live up to their promises. Such hopes are bound to be disappointed. It is time to stop expecting an environmental-friendly government to appear. With global warming threatening our very survival as a species, waiting for an act of political party altruism to save us is bad advice. The Socialist Party seeks to expose the connection between an inequitable, profit-at-all-cost social system and environmental devastation, hoping to draw green movements toward socialist conclusions. Solutions will not come from the capitalist parties. The challenge for the Socialist Party is to help build and understanding of the implication of business-as-usual politics.


Nothing highlights the anarchy of market more than the movement to promote biofuels as a way of warding off climate change.  Rainforests are burned and the soil depleted in order to produce an oil to reduce carbon use. It diverts land from food to biofuel production. Capitalism gives rise destructive and unsustainable forms of economic development. Many socialists are convinced that the continued existence of capitalism and of uncontrolled exploitation of natural resources will bring about worsening climatic disasters, floods, desertification, famines, mass migrations, fuelling discontent and disorder. Add to this instability and mass unrest you have all the conditions for populist tyrants and authoritarian regimes arising. Solutions such as solar power, wind farms, the tidal and wave power, anti-flood defences and soil fertility measures are hampered by lack of long-term investment and the drive for short-term profitability. By eliminating the drive for profits above all else and by expanding alternative energy, it’s easy to see that we would reduce the effects of greenhouse gases. The situation of the majority of people in the world is critical. They must take sides. Combating climate change means demonstrating that the solution requires the reorganisation of society, that we face not technical but political barriers. Any partial demands under capitalism run the risk of being subverted by capitalism and points to the limits of reforms under capitalism and the necessity of a revolutionary transformation of society. Much of the Green argument, despite intentions, are in danger of taking us away from the direction of a real onslaught on the political structures of capitalism and towards the cul-de-sac of individual life-style behaviour. The Socialist Party tries to identify the source of the environmental catastrophe we face and the solution to the problem of climate change – the fundamental transformation of society. 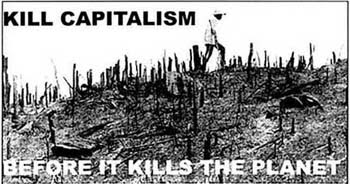