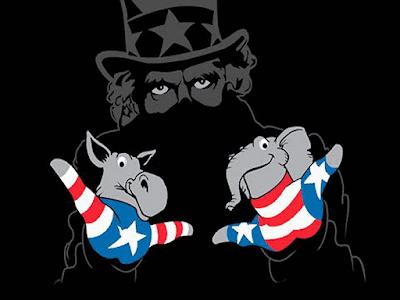 It triggered Alexandria Ocasio-Cortez to answer that in Texas, Republicans passed a law allowing rapists to sue their victims for getting an abortion, asking can anyone name a 'far-left' policy that extreme implemented anywhere? She added that the ‘far-left’ can't even get our party to import cheaper prescription drugs from Canada.

How revealing her response is, an admission that voting the lesser evil has been ineffective.

Kenny Stancil, a commentator with the progressive website CommonDreams, explained that Musk's argument about a supposed leftward shift couldn't be further from reality. The facts are that the Democratic Party position has moved toward ”Ronald Reagan on many economic, carceral, and immigration policies since the late 1970s—resulting in more than four decades of bipartisan neoliberalism.”

Georgetown University professor Don Moynihan responded to Musk's post by showing how increasing political polarization in the U.S. Congress is being driven primarily by Republicans moving further and further right—not the other way around.

And the Democrats have followed them rightwards.

Stancil in his analysis explains “…progressive lawmakers who are advocating for universal access to healthcare—during a pandemic that has killed nearly one million Americans—and an accelerated clean energy transition to secure a livable planet are being stymied at every turn by corporate lobbyists and lawmakers in both parties.” [our emphasis]

What Far-Left? Asks AOC. 'We Can't Even Get Our Party to Import Cheaper Prescription Drugs from Canada' (commondreams.org)