In the United States, children are more likely to experience poverty than people over 18.

In 2020, about 1 in 6 kids, 16% of all children, were living in families with incomes below the official poverty line – an income threshold the government set that year at about US$26,500 for a family of four. Only 10% of Americans ages 18 to 64 and 9% of those 65 and up were experiencing poverty, according to the most recent data available.

The official child poverty rate ticks down when the economy grows and up during downturns. It stood at 17% in 1967 – just about the same as in 2020. In many recent years the rate hovered even higher – around 20%.

Researchers calculate the official poverty rate by adding up a household’s income and comparing it with a threshold of what is needed to survive. The government has calculated this rate the same way since the 1960s.

One of its shortcomings is that it excludes several sources of income, including tax credits and the Supplemental Nutrition Assistance Program, which are intended to reduce poverty.

In 2011, the government began to calculate an alternative metric: the supplemental poverty measure. It includes SNAP and tax credits. It also uses thresholds based on the cost of living in different areas of the country. For a family of four, this threshold currently ranges from $24,000 to $35,000, depending on where a family lives and whether they own or rent housing. According to this alternative measure, 10% of children were living in poverty in 2020, the lowest rate ever recorded.

Depending on which measure you use, either 7 million or 11.7 million U.S. children lived in poverty in 2020.

The Persistence of Childhood Poverty in the US - CounterPunch.org 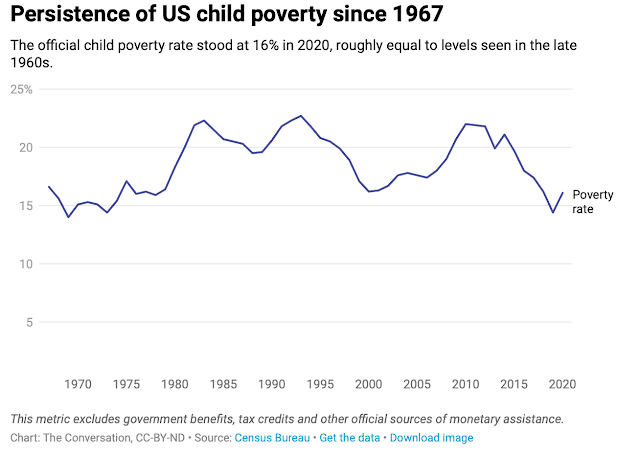