End Air Pollution to Save Lives 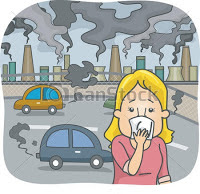 A new study published by researchers from the University of Wisconsin (UW) in the journal GeoHealth on Monday, notes that, by eliminating air pollution resulting from energy-related activities in the U.S., more than 53,000 premature deaths could be avoided on an annual basis.

Researchers found that reducing the amount of air-based pollutants would have a profound impact on public health in the immediate term — and that it would also have long-term positive effects when it comes to transitioning away from unsustainable energy sources and addressing the climate crisis as a whole.

A reduction in pollutants would also likely benefit groups of people who are more susceptible than others to these types of pollutants, an EPA report stated.

“These groups include children, pregnant women, older adults, and individuals with pre-existing heart and lung disease,” the EPA said, as well as people “in low socioeconomic neighborhoods and communities [that] may be more vulnerable to air pollution.”

A study from last year, for example, found that 74 million lives could be saved by the end of this century if energy-based air pollution was eliminated by the year 2050.

Eliminating Air Pollution Could Save More Than 53,000 Lives Per Year, Study Says (truthout.org)

Posted by ajohnstone at 2:02 am