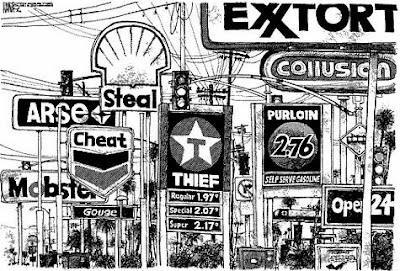 Oil giants BP and Shell are on course to make a combined profit of about £40bn this year from the rocketing price of petrol and gas.

North Sea oil and gas companies that already benefit from huge tax breaks could use fresh rules to slash how much they pay under a new windfall tax announced by Rishi Sunak as part of his £15bn cost of living package, according to a thinktank. The chancellor risks raising a fraction of the £5bn he expects from the complex scheme – which allows the cost of new investments to be offset against profits – should oil and gas companies take the opportunity to dramatically reduce their contribution to the exchequer, said the thinktank Common Wealth.

Research carried out with the New Economics Foundation, which found that the government had handed firms operating in British waters tax breaks worth about £3.1bn in 2019-20 and £2.5bn in 2020. Most of the funds were directed to shareholders in share buy-back schemes. The Treasury has not calculated how much of the £5bn in extra tax could be lost if North Sea operators claim extra investment allowances over the next three years.

Christine Jardine, the Liberal Democrat Treasury spokesperson, said Sunak’s “11th hour” 25% windfall tax on oil and gas company profits allowed them to carry on “with business as usual” and direct most of their profits to shareholders.

“It’s bad enough that the chancellor waited until the 11th hour to tax big oil and gas, when Liberal Democrats first called for a windfall tax last October. Now it looks like it may not even raise what he said it will. That’s more levy lite than windfall tax.” She accused the chancellor of “going soft on huge companies making a killing out of a crisis”.