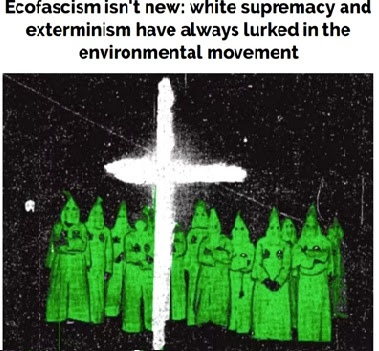 Some in the environmentalist movement have succumbed to ideas that are promoted by the far-right and eco-fascists that population control and immigration restrictions are a solution to the effects of climate change. The attorney general of the US state of Arizona cited environmental protection when he sued the Biden administration for loosening immigration laws, claiming that migrants would use up resources, cause emissions and pollute the environment if they weren't kept out by a wall with Mexico. Eco-fascists use racist theories to conflate the degradation of the natural environment with the degradation of their culture and their people, added Thomas. They believe that white people, along with the environment, are threatened by non-white overpopulation. Marine Le Pen has invoked climate change and environmental protection in her nationalist campaigns, while the youth wing of Germany's far-right climate-sceptic AfD party called on the party to embrace climate change as an effective recruitment tool.

Treating people as the problem isn’t just misguided — it’s dangerous. When concern about population becomes central to environmental policy, “racism and xenophobia are always waiting in the wings.” said Betsy Hartman, former director of the population and development program at Hampshire College and author of 'Reproductive Rights and Wrongs: the Global Politics of Population Control,'

“In this ideology of ‘too many people’ it’s always certain people who are ‘too many,’ ” Hartman said. “It just shifts the discourse away from the real problem of who has power and how the economy is organized.”

“But doesn’t having more people on the planet lead to more fossil fuel consumption, which leads to more emissions?” some over-populationists respond.

Not so, Princeton University environmental engineer Anu Ramaswami, an expert on sustainable cities and contributor to the United Nations’ Global Resources Outlook explained. A small minority of wealthy people produce the majority of global greenhouse gas emissions — their consumption habits have a much greater impact than overall population numbers. It’s true that the planet can’t support unlimited population growth, Ramaswami said. But if people can figure out how to moderate our consumption and meet our needs without fossil fuels, experts say, it is possible for all of us to live sustainably and well — even if there are more of us.  Ramaswami said. “Fixating on population decrease doesn’t make much of a difference.” People in the world's richest countries emit 50 times more than those in the poorest, despite having much slower population growth.

Over-populationists ignore the enormous inequality of wealth existing within every nation, whether thickly or thinly populated. They also ignore that much of the population between 16 and 60 are not engaged in producing wealth at all, but are either idle or are carrying on purely wasteful services called into being by the capitalist system. For them, there are no class divisions in society. They dismiss our contention that nature, contrary to some claims, is sufficiently bountiful for our needs. Many assert that over-population is the cause of modern wars. It is, of course, nonsense. The urge to find markets and sources of raw materials affects every capitalist country, irrespective of population. Is it a “natural” or a “man-made” law which prevents millions of workers from taking possession of the wealth which they create but do not possess? What natural law prevents the workers from enjoying the food and housing reserved for the propertied classes? The amount consumed by members of the capitalist class depends on their ownership of the means of production, which in turn depends on their control of the political machinery of society. There obviously are problems of population, but the problem of working-class poverty is not one of these. That problem cannot be solved by the workers until they have taken possession of the political machinery and re-organised society on a socialist basis.

We all need to eat. We all need homes that are warm in the winter and cool in the summer. We all require to travel. But the economic system can change.

Eco-fascism: The greenwashing of the far right | Environment | All topics from climate change to conservation | DW | 19.05.2022