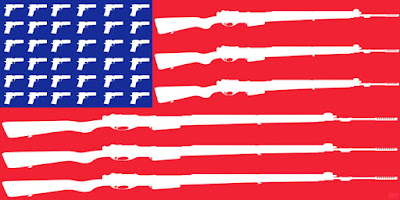 Rejecting the idea that Congress should legislate to restrict easy access to guns, Republicans echo the words of Trump that it is necessary to militarized schools with armed security, andarmed teachers. Schools are to be turned into fortresses.

Politicians bought and paid for by NRA campaign funding, actively obstruct any introduction of gun safety laws. They do not question why an 18-year-old cannot buy alcohol yet legally can buy an assault rifle. It has been over 20 years since the Columbine mass shooting and very little has changed. In recent days we have had gun massacres at Buffalo and Uvalde as evidence that lessons are not being learned and deliberately are ignored

The problem in the United States is not Trump. It is the total acquiescence to the capitalist brainwashing of American individualism and American exceptionalism. As long as capitalism exists, we, the working people, will have no say in our society is run.

Posted by ajohnstone at 3:09 am