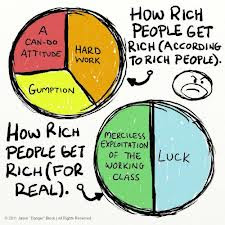 This article on the Bloomberg website raised a few points of interest.

“The policy advice economists draw from their theories is never “value-neutral” but foists their values, dressed up to look like objective science, on the rest of us. Take, for example, free trade. In judging its desirability, economists weigh projected costs and benefits, an approach that superficially seems objective. Yet economists decide what enters the analysis and what gets ignored. Such things as savings in wages or transport lend themselves easily to measurement in monetary terms, while others, such as the social disruption of a community, do not. The mathematical calculations give the analysis a scientific wrapping, even when the content is just an expression of values. Similar biases influence policy considerations on everything from labor laws to climate change...

...Most economists, for instance, see the weakening of trade unions in the U.S. and other Western nations in the past few decades as a good thing, because unions’ monopoly power over wages impairs companies’ ability to adapt to the demands of the market. As Acemoglu and Robinson point out, however, unions do a lot more than influence the supply and cost of labor. In particular, they have historically played a prominent role in creating and supporting democracy, in limiting the political power of corporations, and in mitigating income inequality...

...There’s a real danger in seeing economics as an objective science from which all values have been stripped..."

The article’s author seems unusually reluctant to state the obvious and explain that economics is the field of class war.

One of the textbook definition of economics is along the lines of the study of how societies use scarce resources to produce and distribute goods and services. Paul Samuelson in his Economics, in a very widely studied economics textbook, speaks of a "large scarcity" and says that if goods were not scarce then there would be no role for a science of economics. That's one definition of economics and, clearly, on it, "economics" will have existed since the Stone Age and before and will still exist in socialism. But that's not how Marxian socialists have traditionally defined it. Most people wouldn't regard the term "socialist economy" as a contradiction, but that would probably be because they envisage "socialism" as having the familiar features of today's "economy", i.e. production for the market, monetary incomes, etc. This is not how Marx and many in the Marxist tradition would describe socialism. For instance, in her series of lectures later published as What is Economics? Rosa Luxemburg concludes that it is the study of the impersonal economic laws that come into operation as if they were natural laws when there is generalised production for sale on a market with a view to profit. The subject of "economics" is "the economy" that comes into being under these conditions.

In other words, "economics" is not the study of the production and allocation of resources as such but the study of this when there is an "economy". Economics only arose with capitalism, as in previous societies, where there was production and distribution (and, in most, exploitation) for direct use, there was no need for a special branch of science to study this: it was transparent. For the same reason, there will be no role for "economics" in socialism, precisely because socialism won't be an economy.

When we criticise "economics" it is its claim to be studying eternal facts of human existence, instead of just what happens at the present, capitalist stage of human social development. On this definition where there are no markets there is nothing to study.

At its very core—indeed in its first principle—conventional economics is anti-socialist. It justifies both its own existence and capitalism's on the basis that resources in society will always be scarce. Not only this, it postulates that wants are somehow limitless too, ensuring an irreversible tendency for demand in society to exceed supply without the guiding hand of the price mechanism to ensure some sort of equilibrium. In taking this position, economics reveals itself to be the ideological discipline it really is, distorting any meaningful definition of the word "scarce" (which, like dictionary definitions, would stress its relative nature, that is, resources in relation to needs) in favour of abstract absolute concepts like scarcity existing at any point when resources aren't infinite. It is from this entirely bogus philosophical construction that economics deduces that abundance is impossible, and that so, therefore, is socialism.

As the problems of capitalism have proved to be so remarkably intractable, so economics has seen its practitioners splinter into opposing camps offering conflicting analysis and advice. Even if the fundamental propositions of mainstream economics have been the same over time, the precise theories advanced by economists at any given point have sometimes varied markedly from those considered so useful in other periods. Indeed, it is because conventional economic theories have proved to have been such failures that they have been picked up and then dropped to be replaced by something else with such monotonous regularity. Economists do not appear to have any new theories left, just—at best—remixes of old ones. In the century now passing, protectionism, free trade, land taxes, social credit, currency inflation, currency deflation, rearmament, Keynesianism, the "welfare state", nationalisation, indicative planning, privatisation and monetarism have all at some point been advocated by large numbers of economists as the solution to the economic problems of the time. The mind of capitalist economists is dogged by determination to show that the market system works, and the unshakeable belief that the consequences within the market economy are the result of mistaken or otherwise conscious decisions of the actors within the economy.

Economics is the study of the factors governing the production and distribution of wealth under the market system of production for profit. Socialism will re-establish conscious human control over wealth production; therefore, socialism will abolish capitalism’s economic laws and so also ‘the economy’ as the field of human activity governed by their operation. Hence socialism will make economics redundant.

If humans are involved, ideology is involved. Economists are humans, and are not non-ideological beings, but are products of our class-divided society. No matter how they dress their ideology in pseudo-scientific objectivism, economists cannot square a circle.
Posted by ajohnstone at 1:08 am