Justice? We don't think so 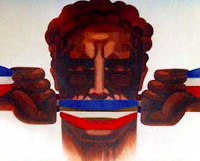 It would be heartless to blame Bradley Manning for apologizing for his actions and effectively begging for the court's mercy.  He said he was sorry his actions had hurt people, despite no evidence having shown that they did. He had been psychologically tortured having been held in solitary imprisonment for years.  He has been stripped naked and subjected to cruel, inhumane and degrading treatment by the United States government. His constitutional right to a speedy trial has been ignored. He has sat for three years in pre-trial detention, while the government assembled 141 witnesses and withheld thousands of documents from his lawyers. He was on trial in a system rigged against him. He was denied the right at trial to argue that no harm was caused by his alleged actions. His defence team was pre-emptively banned from describing his intent or showing that his actions harmed no one. He was acquitted of "aiding the enemy."  and his convictions solely relate to his alleged decision to inform the public of war crimes and systematic injustice.

In the trial of one of the most significant whistleblowers in U.S. history,  there was no mention of anything he'd blown the whistle on, any of the crimes exposed or prevented, wars ended, non-violent democratic movements catalyzed. Nothing on why he's a four-time Nobel Peace Prize nominee. Wars went unmentioned. Manning wanted to end wars that the majority of Americans think were wrong ever to have begun.

In the case of the whistleblower Edward Snowden,  Obama  said,“If, in fact, [Snowden] believes that what he did was right, then, like every American citizen, he can come here, appear before the court with a lawyer and make his case.”

No, he can’t and as an ex-legal attorney, Obama knows full well the truth.

Snowden will not be able to make the case he’d like to make in court because there is no public interest or whistleblower exception under the Espionage Act. In recent cases, prosecutors have convinced courts that the intent of the leaker, the value of leaks to the public, and the lack of harm caused by the leaks are irrelevant, and are therefore inadmissible in court.

This means Snowden would never be able to tell the jury that his intent was not to help foreign countries or harm the U.S., but to inform the American public about the government’s secret interpretations of laws used to justify spying on millions of citizens without their knowledge.

Snowden would also not be able to explain to a jury that his leaks sparked more than a dozen bills in Congress, and half a dozen lawsuits, all designed to rein in unconstitutional surveillance. He wouldn’t be allowed to explain how his leaks caught an official lying to Congress, or that they’ve led to an unprecedented review of government secrecy.

The jury would also not be able to hear how there’s no demonstrable harm to the United States in releasing this information. And if the prosecution argued that some harm was suffered, Snowden wouldn’t be able to explain that the enormous public benefits of these disclosures far outweighed any perceived harm.

In Snowden’s case, the administration will be able to exclude almost all knowledge beneficial to his case from a jury until he’s already been found guilty of felonies that will have him facing decades, if not life, in jail.

This is why rarely, if ever, whistleblowers go to trial when they’re charged under the Espionage Act. John Kiriakou, the former CIA officer to go on-the-record with the media about waterboarding, pled guilty in his case partially because a judge ruled he couldn’t talk about his lack of intent to harm the United States in court.  In the ongoing leak trial of former State Department official Stephen Kim, the judge recently ruled that the prosecution “need not show that the information he allegedly leaked could damage U.S. national security or benefit a foreign power, even potentially.”

Posted by ajohnstone at 2:51 am