How the rich are doing 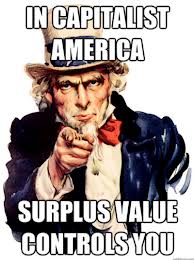 The richest one percent in America are richer than they’ve been in decades. They hoard their cash, buy politicians who will protect their interests, and they also control our media, in the hope we don't question it.

The richest people in America hoard excruciatingly high amounts of their money. 37 percent of their income goes unspent.

Corporate profits are the highest they’ve been since the mid-20th century. In the third quarter of 2012, corporate profits stood at 14.2 percent which is higher than they’ve been since 1950. Corporations have earned 20 percent more than the previous year since the crash in 2008 and one percent captured 121 percent of income gains since that same year.

How do they accomplish it? Political control combined with thought control.

Owners or publishers of the media  dictate what to cover in their  the newspaper and TV and radio stations. Six companies control 90 percent of the news providers.
Joseph Pulitzer, who the prestigious journalist prize is named after, said  "Always oppose privileged classes and public plunderers, never lack sympathy with the poor, always remain devoted to the public welfare, never be satisfied with merely printing news, always be drastically independent, never be afraid to attack wrong, whether by predatory plutocracy or predatory poverty."
Don't expect that to appear on the masthead or mission statement of the media corporations.

The list of the wealthiest American politicians can be read here. The rich take care of the rich.