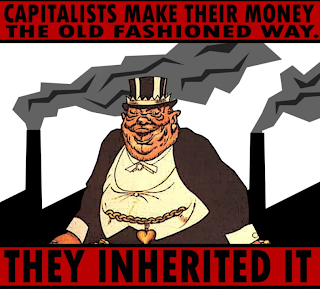 Wealthy families are still with us. The Rockefellers, the Vanderbilts, the Astors stay rich and their wealth continues to grow. Gregory Clark, an economist at the University of California notes that across a single generation some children of rich parents are bound to suffer random episodes of bad luck. Such statistical anomalies makes society look more changeable than it is. Extrapolating the resulting mobility rates across many generations gives a misleadingly sunny view of long-term equality of opportunity. Clark suggests that family history has large effects that persist for much greater spans of time. Fathers matter, but so do grandfathers and great-grandfathers. Indeed, it may take as long as 300-500 years for high- and low-status families to produce descendants with equal chances of being in various parts of the income spectrum. Clark reckons that even in famously mobile Sweden, some 70-80% of a family’s social status is transmitted from generation to generation across a span of centuries.

Inheritance has been estimated to make up 6% of the US GDP each year. Privileged families will always seek to extend their own advantages to their children. Stephen Haseler argues in the “SuperRich" that America is becoming an inheritance culture in which much economic opportunity is from family inheritance and not personal achievement.

If you come from a wealthy family, your opportunities for education and health care and maintaining an upper-class status are very good. If you are born into a low-income family the idea that you can climb up based on sheer talent and grit is no longer a strong possibility.  High-income American children in 2013, whose test scores, college graduation rates, earning potential and wealth prospects are increasingly divorced from those of low and middle-income children. Wealth has always paved a smooth path for the next generation. Affluent families help their kids in a myriad of ways to get a leg up in preparing for school, getting into selective colleges and launching decent paying careers.  They pull further and further ahead. As wealth concentrates, this cycle worsens.  Affluent families confer more and more advantages upon their children. Advantages accelerate for wealthy children while disadvantages compound for everyone else.

Imagine a ten-mile race in which contestants have different starting lines based on parental education, income, and wealth. The economically privileged athletes start several hundred yards ahead of the disadvantaged runners. Each contestant begins with ten one-pound leg weights. The race begins, and the advantaged competitors pull ahead quickly. At each half-mile mark, according to the rules, the first twenty runners shed two pounds of weights while those in the last half of the field take on two additional pounds. After several miles, lead racers have no weights, while the slower runners carry twenty additional pounds. By midrace, an alarming gap has opened up in the field, and by the finish line, the last half of the field finishes more than two miles behind the winners.

This race of accelerating advantages and compounding disadvantages is a disturbingly accurate metaphor for inherited privilege. As in life, there are well-publicized stories of exceptional runners starting far back in the pack and breaking to the front of the field, therefore able to shed weights and remain competitive. There are also front-runners who perform poorly, squandering their initial advantages and falling back. But the overall picture is one of steadily growing class-based inequality. Consistent with emerging sociological research about children and opportunity, once inequalities open up, they rarely decrease over time. Family wealth  serves as a form of adversity insurance, as young adults face potential setbacks including prolonged unemployment, bad credit, health or addiction problems, criminal arrests, car breakdowns or accidents, or early parenthood. Young adults may make poor decisions or face unforeseen circumstances, but in almost every case, family wealth will help keep young people on track, whether it comes in legal assistance, treatment, or regular cash infusions.

"The modern meritocracy is no better at achieving social mobility than the medieval oligarchy." Clark concludes

Posted by ajohnstone at 4:20 am