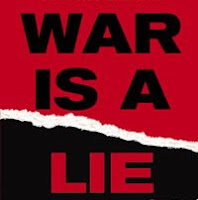 Lying is the trade of politicians and the military. Workers are lied to from the cradle to the grave: at school with distortions of history and myths about God; in the workplace, as producers, lied to by their bosses and at home as consumers bombarded with the lies about what we buy  perpetuated by the advertising industry. The entire capitalist edifice depends on the promotion of lies, half truths and the distortion of facts. So powerful is the distortion machine that it takes all our powers to separate the lies from a resemblance of the truth.

We can demonstrate against all kinds of things that we consider ‘unfair’ but unless we recognise and tackle their cause the problem will only remain. Capitalism is a war-prone society in that built-in to it is perpetual conflict between rival states over markets, raw material sources, trade routes and investment outlets, for the profit-seeking capitalist corporations they exist to protect. You can't have capitalism without wars, the threat of war and preparations for war. The anti-war stance of the Socialist Party is well-known, as is  its view of how to remove the causes of war. Once again, well meaning people are protesting capitalism’s war- policies.

Each group of capitalists, ruling in a particular country, does whatever it thinks is best for its own interests. Lots of advice is given, but the decision rests with each country's ruling class. In Britain, there may be a lot of feeling against going to war. David Cameron, in his present role as right-hand man to the British ruling class, and administrator of British capitalism, will ignore whatever anti-war feeling there is  and will do what he thinks  the British capitalist class want him to do.

There is no such thing as a "surgical strike". There will be “collateral" damage on civilians. It should be clear that the planned western powers air-strikes aren't about saving Syrian lives. It is all about saving face. If these heads of state really cared about  Assad killing his own people they would have "done something" constructive much sooner. They would have exerted the necessary pressure on the rebels to get them to agree to peace talks at the negotiation table with Assad, rather than providing them with the reasons not to parley. If they really cared about innocent Syrian lives, the US/UK/France would not be engaging in a proxy war to destabilise the new "axis of evil" of Iran, Syria and Hezbollah.

Despite claims of little doubt that Assad used these weapons there is, in fact, significant doubt at thi moment in time but that still is not the real point. We must ask why the crocodile tears shed over the “inhumane” use of relatively and strategically ineffective chemical weapons and just why are they considered fundamentally different from blast and shrapnel and incendiary weapons in countries arsenal? Why does the use of chemical weapons justify international retribution with military force, in a way that two years of brutal repression by the Syrian people with tanks and planes does not? Could it be that the Great Powers have a monopoly on the possession of conventional weaponry and chemical weapons are a cheap easily-made alternative to sophisticated cruise missiles and stealth bombers?

While it is important that workers oppose war, it is just as important that we recognise just why armed conflicts between states break out and in whose interests wars are waged. If you think about it you'll be hard-pressed to think of a single war that did not have its roots in the desire of small elites to make profits. All wars, even small-scale conflicts – and the conflict in Syria is no exception – tend to be fought over foreign markets and areas of influence, trade and geo-political  routes. To end war – and the need to demonstrate against each war as one war succeeds another – capitalism has to be ended and replaced. The choice is to protest endlessly against each and every new war which inevitably arises or campaign for a new world of common ownership, democratic control, peace and human welfare.  Even in times of peace – as the armed truce between wars is called – capitalism's pursuit of profit pollutes and plunders the planet. We can bomb the world to pieces but we cannot bomb it to peace.
AJ
Posted by ajohnstone at 12:11 am