The Diplomacy of Death 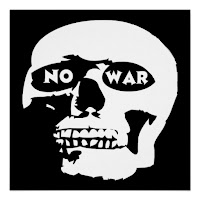 The vote against a British attack in Syria by the UK parliament is a victory for democracy, albeit a small and temporary one but a very welcomed one.

It doesn’t matter whether or not Syria’s Assad used chemical weapons. Even if the accusations are more-or-less true, one cannot lose sight of the fact the Great Powers are not acting out of altruism, but are exploiting other peoples' tragedy and horror in the service of their own geopolitical ends.  Responsibility to Protect (R2P), the “War on Terror,” or spreading “democracy/ human rights,” and so-called WMD claims are used to justify interventions.  Western powers are more than happy to cooperate and collaborate with agents carrying out the very atrocities they are condemning when geo-politically expedient.  They are eager to turn a blind eye to astonishing human suffering when to do so is in their nation's interest. These moral stances are used to justify rather than determine policy. Often more lives are lost under R2P than stood to be lost without intervention, greater oppression follows Western “liberation,” greater atrocities unfold as a result of Western “punishment” for “crimes against humanity,” more extremists are created as a result of the “War on Terror.” History offers sufficient proof. In Kosovo, the Serbian ethnic cleansing of Albanians increased, not decreased, once NATO commenced its attacks. In Afghanistan and now Libya, so called fighters for democracy turned out to be Islamic  fundamentalists who turned their American-supplied weaponry on Americans. Nor can we forget the US support of the Nicaraguan Contras as "freedom fighters" and not the drug-running murderers they were.

It has been argued by informed commentators that the West does not actually want the civil war in Syria to end but hope that it continues for a long time whereupon  Hezbollah, the Syrian Army, and al-Qaeda will continue to tear each-other apart and they point to the half-hearted pursuit of a diplomatic resolution and insistance upon unreasonable and unacceptable preconditions to them, forever delaying the start of peace talks.

If America decide that the air-attacks should proceed there will be no doubt many will believe the official statements that it will be only against military targets. They will be unaware that speaking under oath,  the U.S. military chief described the inevitable “collateral damage” (military words for civilian casualties) the coming attacks will cause. Poor souls who had absolutely nothing to do with the alleged chemical weapon attacks allegedly carried out by Syrian government will be on the receiving end of missiles and bombs. Human life is rarely treated with very much sanctity by politicians sitting in debating chambers thousands of miles away from the the horrors of war.

When the ruling class talk war it is more than ever necessary for the workers in this country to remember that the workers in other countries have as little direct responsibility for their callous ruling class and bloody-minded military as we have for ours. Almost no wars in history have ever been decided on by the people who were called on to fight them. It has been the politicians. War can now be conducted remotely from a bunker in California via armed drones using real-time video by those no more capable of relating humanly and emotionally to their targets than playing a computer game. The blunting emotional impact of mass murder had finally attained schizophrenic proportions in the minds of the war-makers. The agents of the capitalist class of today have acquired an absolute and terrible decision-making power that autocrats and emperors could once only have dreamed.

One of the intentions of the United Nations was to stop war. The idea was that all the nations should come together in an international body and use their collective strength to maintain universal peace. A glance at history shows that in this respect the U.N. has failed miserably and slaughter and destruction in the defence of capitalist interests has continued. The governments that meet in the UN have behind them national conflicts of interest and because of the competitive character of capitalism the UN cannot help but be use by the big powers for their own strategic and commercial purposes. The conflicts do not disappear when they get together in a large group any more than when the diplomats of rival powers get together in a small group. The UN’s precursor the League of Nations was at one time labelled the league of bandits; the UN’s Security Council is little different. Workers feel that war is unavoidable and that it is better to win a war than to lose it. Nor has the Socialist Party any hesitation in rejecting the argument that workers should be prepared to support a war carried out under the auspices of the UN Charter. The workers have no interest in engaging in wars between capitalist groups because such an organisation is involved. Socialists hold that the menace of war cannot be done away with while its cause, the capitalist system, remains. The Socialist Party does not support armed intervention by any capitalist state.

Cameron, Obabama and Hollande endeavour with the complicity of the media to win over the reluctant support for actual war presenting it as humanitarian intervention, and promise no boots on the ground, so it is to be fought instead remotely from a distance, aircraft strikes and missile attacks but most of all by proxy armies.  Wars of capitalism have never protected human rights; in truth they have damaged those rights, at times, destroyed them. Diplomacy—one of the practised arts of the capitalist system—cannot be an affair of honour; it must function by double-cross, concealment, treachery and lies. When the Cameron government promotes “regime change” in Syria, it does so for strategic and economic reasons that have nothing whatsoever to do with democracy.

War cuts across the basic identity of interest of the workers of the world, setting sections of them at enmity with each other in the interests of the capitalist class. Its effect is wholly evil. It depraves all the participants by forcing them to concentrate and commit misery and  killing upon each other. It elevates lying, and murdering opponents into virtues, it confers honours on those who practise these means most successfully. Men and women have the vile methods of warfare imposed on them and are filled with the idea that violence and not mutual understanding is the final solution in all problems. Many of those who have been subjected to the atmosphere and atrocities of war remain addicted to violence or traumatised by it when hostilities have come to an end. War cannot be humanised. Its brutalities will cease only when capitalism, which is the cause of wars, has been brought to an end.

The anti-war movement must not let the need to resolve the real cause of our problems slip through our fingers and lose  a lasting solution  as we protest against the barbarous civil; war in Syria and protest any escalation of it. Marches and demonstrations can never, in and of themselves, stop war. What is needed is a patient argument with the movement that capitalism itself engenders war. Needless to say this is exactly what the SPGB has always done.

We condemn not just either of the government or rebel forces, or the Shi’ites or Sunni sectarians. We condemn the system of social organisation that creates conditions in which civil wars can all happen — a system where it must always be "You or I" and rarely "You and I". Socialist point out and explain the war existing in society - the class war -  must be won before we can end  the cause of wars.  Wars are not about freedom and democracy. That's just a convenient slogan. Wars are part of the more violent ongoing competition for profit and power in the world. When negotiations finally break down, the ultimate form of competition is war. The only war — if you want to call it that — for freedom and democracy that British people have been involved in was against our own ruling class. Atrocities are going on all the time in different countries, and other nations do little or nothing about them — unless they want to use them as propaganda. Governments talk about human rights and freedom when it suits them, but if you look at their actions it's just hogwash. They are completely devoted to protecting and expanding possessions and profits and power — utterly regardless of human beings. Whoever wins a war, the people always loses — on both sides.

We can fully understand the desire to stop war and socialists are opposed to war in all its forms. But first and foremost we are opposed to the capitalist system which gives rise to war. Removing evils in isolation cannot be done. The phrase "national interest" is the mealy mouthed language of diplomacy. Much fallacious drivel has come forth from politicians and media hacks alike about "principles of international law". The hard fact is that wars are not fought for moral reasons – the only justice of significance to the ruling class is that which ensures their own power. The only way to stop it is to join us in campaigning to end capitalism. Wars will stop when people no longer support the social system that gives rise to them and replace it with one where wars are a thing of the past. The role of revolutionary socialists is not simply to declare abstract principles. There are plenty of pious and sincerely motivated people who are deeply committed to “peace". Such aims are utopian unless they are related to the historical possibility of establishing a classless, stateless society. Understanding that capitalism causes wars, socialists urge the need for conscious political action to end capitalism and thus eradicate war. The Socialist Party has often stood alone in condemning war from a class angle. Frequently alone among all political parties in Britain, the Socialist Party has never supported one capitalist interest against another in a war. We have refused to be tricked into support for legalised killing and consistently we have argued that workers have a material interest in opposing all wars. For workers there is but one way ahead and that will not be in the company of capitalists of any nation.

Capitalism’s war drums are never silent. They are always beating away in the background. At certain times they become more strident—now is one of those times.
Posted by ajohnstone at 1:50 am