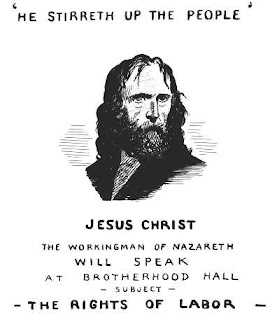 Socialism is not only a social and political doctrine but is also a unified complete world outlook. As such, it comes into sharp collision with religion. Religious philosophy is based on the feelings of man’s fear.

The church has always been and continues to be an instrument of enslavement and it has accustomed men and women to servility. It has sanctified the inquisition and witch-hunts with its burnings at the stake. It has organised the persecution of free human thinking and it has blessed and justified the foulest wars.

All religions have within themselves the promise of happiness but admit that the happiness will be realised only outside this mortal world, after death. Socialists work towards a world of happiness without having to wait for it in a “something beyond,” (which, to say the least, is very problematical).

We fight against priests because of their anti-socialist activity and not because they believe in God. The priests of all religions have been, in all phases of history, the allies of the governing classes in keeping the masses bent under the yoke. Churches have crowned the peoples’ oppressors, and crucified their saviors.

Although Jesus is usually presented  as gentle and submissive, many suggest that whether he really existed or is only imaginary,  he was a rebel. This was a a period with peaceful Essenes the militant Zealots and the terrorist Sicarii. Some say Jesus was the friend of the poor but he would dine with Simon, the rich Pharisee and mix with rich aristocratic Nicodemus.

Socialism does not feel the necessity of specifically targeting religions because we deem that they  are destined to eventually disappear. In fact, the Socialist Party will argue against religious intolerance in all its forms. Socialists have little interest in preaching in preaching atheism. The struggle against religion is the business of science.

Science gives no exhaustive and final answers, it gives no absolute truths, but only relative ones. When a prophet (or The Prophet) is deprived of divinity, or his claim to it is not generally admitted, his scripture cannot command absolute and infallible authority. The teaching of a mortal cannot have the majesty of eternal truth, and scriptural laws cannot claim immutability. Without miracles there is no religion.

Posted by ajohnstone at 1:19 am