The Freedom Walkers - Still a way to go 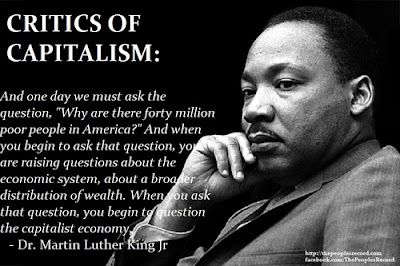 Today marks the 50th anniversary of the start of the 1963 March on Washington for Jobs and Freedom, where  Martin Luther King Jr. delivered his famous “I have a dream” speech.

Fifty years ago, the unemployment rate was 5 percent for whites and 10.9 percent for blacks, according to the Economic Policy Institute. Today, it is 6.6 percent for whites and 12.6 percent for blacks. Over the past 30 years, the average white family has gone from having five times as much wealth as the average black family to 6 1/2 times, according to the Urban Institut. Twenty-one percent of blacks lack health insurance, compared with 13 percent of whites.  The average household income for African-Americans ($32,068) lags well below that of white families ($54,620) and declined by 15 percent from 2000 to 2010. Expressed as a share of white income, black households earn about 59 percent of what white households earn in 2011, a small increase from 55 percent in 1967. Infant mortality for African Americans in 2.5 times that of whites

To-day Jim Crow laws still remain - one out of thirteen African-Americans (2.2 million people) cannot vote because of felon disenfranchisement laws—four times higher than the rest of the population. There are more black men in prison today than were enslaved in 1850. Drug laws are disproportionately used against blackss, even though bankers laundered drug money by the tens of billions of dollars and not a single one has been prosecuted.  The banks "too big to fail" and "too big to jail." but New York City's billionaire mayor can boast about his unconstitutional "stop and frisk" policing policy

The March on Washington was not initiated by King but called by A. Philip Randolph, president of the Brotherhood of Sleeping Car Porters, the march became a joint project with the Southern Christian Leadership Conference. We should not forget the importance of the black labor movement.  Randolph and other black labor leaders, particularly those grouped around the Negro American Labor Council, were responding to the fact that the black worker was largely being ignored in the discussions about civil rights.

In Randolph’s opening speech he proclaimed that those gathered before him aimed at creating a society where “the sanctity of private property takes second place to the sanctity of the human personality.”

The idea for the march in 1963 did not appear out of nowhere and was, in certain respects, the revival of an idea from 1941 when Randolph convened a group to plan a march on Washington, D.C. to protest the segregation of the growing war industry. That march, which was planned as a black march on Washington, never happened because the mere threat of 100,000 African Americans marching forced President Franklin Roosevelt to give in to the demand for an executive order bringing about formal desegregation of the war industry.

Baynard Rustin was the  principal organizer of the 1963 March. Rustin was a gay pacifist with a long history of organizing, but despite his record of achievements, homophobia led to him being denied the title of national director of the march—technically, he served under Randolph.

Many prominent figures in the civil rights movement showed personal courage and sacrifice to transform American society. But we should also recognize the many thousands of other acts of resistance and civil disobedience by everyday heroes and long forgotten local crusaders that created an unstoppable tidal wave of protest, that built the social movement and a community effort to overthrow injustice. Too many people have remained silent in the face of ongoing injustice. It's understandable. We're living under fear -- fear that we'll lose our jobs, fear that we'll lose our homes or our credit ratings, a fear for the future. We can help each other find the courage to do the right thing, if we work together. That's what movements are for. We need to renew the workers’ movement to fight for genuine transformation of our politics, our economy and of our lives.
Posted by ajohnstone at 12:46 am