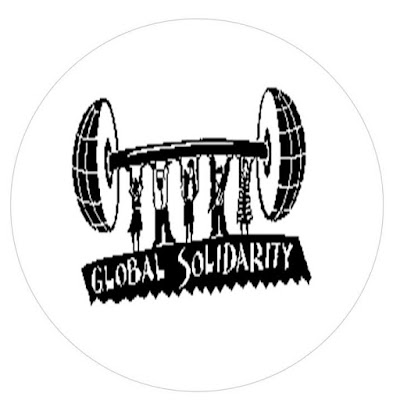 San Francisco Bay Area human rights protesters on Friday prevented an Israeli-owned cargo ship from unloading at the Port of Oakland as part of a weeklong international #BlockTheBoat campaign.

The Arab Resource & Organizing Center (AROC) is part of the global Boycott, Divestment, and Sanctions (BDS) movement for Palestinian rights and backed by union workers. The Block the Boat campaign—in which activists are mobilizing to prevent Israeli ships from docking at ports in Los Angeles, Houston, Vancouver, Seattle/Tacoma, New York/New Jersey, Philadelphia, Italy, and South Africa—comes in response to Israel's recent assault on Gaza, as well as ongoing Israeli apartheid, ethnic cleansing, and illegal occupation and settler colonization of the West Bank and East Jerusalem in Palestine.

The activists targeted the Volans, a container ship owned by Haifa-based ZIM Integrated Shipping Services Ltd. that has been circling outside the port for nearly two weeks. While the ship was able to dock Friday morning, as of 8:00 am local time it remained fully loaded, with cranes idle, as longshore workers refused to cross the protesters' picket lines.

"Once again, we have demonstrated that the Bay Area, workers, and all social justice movements support the Palestinian struggle for freedom, and that there will be a high price for all companies who do business that profits the apartheid state of Israel," AROC executive director Lara Kiswani said. "We honor the workers here in Oakland and Palestine, and are sending a clear message that profiteering from Israel's apartheid and ongoing violence against the Palestinian people will not be welcome in the Bay Area," she added.

Last month, members of the South African Transport and Allied Workers Union in Durban answered a call from the Palestine General Federation of Trade Unions by refusing to unload cargo from a ZIM ship. Dockworkers of the top 3 confederate trade unions in Ravenna, Italy declare refusal to load container marked arms and explosives on ship destined for Israel.

"An injury to one is an injury to all. Just as ILWU Local 10 workers refused to unload cargo from apartheid South Africa in the 1980s, we honored community pickets asking us not to unload cargo from Israeli ZIM vessels in 2014," said Jimmy Salameh, a Palestinian rank-and-file worker with the ILWU Local 10, referring to a similar action at Oakland's port nearly seven years ago.