Who pays the piper calls the tune 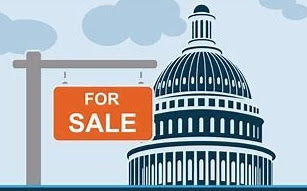 In the American political process, the financial sector spent a record sum of nearly $3 billion on campaign contributions and lobbying during the 2019-2020 election cycle.

Wall Street has one goal: to maximize profits and uses the power of its wealth as leverage over the electoral and legislative processes. The wealthy have their own priorities, which are typically opposed to the needs of most Americans. The wealthy seek policies that make them richer, creating a cycle of political and economic inequality.

For Wall Street, spending massive sums on lobbying and campaign contributions is a highly calculated decision. Wall Street wants to derail financial regulation and keep low tax rates. It needs friendly legislators to do it, and it has something they want: money. Wall Street's priorities have become Congress' priorities.

The financial sector’s political spending skyrocketed by 50 percent between the 2015-2016 and 2019-2020 election cycles, culminating in $2.9 billion spent in the past year, according to a recently released report from Americans for Financial Reform. The highest spender on Wall Street, Blackstone CEO Steven Schwarzman, spent more than $33 million alone on campaign contributions during the last election cycle.

With individual donations and PAC contributions, corporations and Wall Street donate to win influence. It is also the third-highest industry spender on lobbying activities, with nearly $1 billion on lobbying in 2019-2020.

During the past two decades, around 90 percent of House elections were won by the candidate in the race who spent the most money.

91 percent of Americans believing it is important to regulate financial services. Over two-thirds of Americans support a wealth tax on billionaires, 75 percent of Americans support eliminating the disparity between the tax rate for earned and unearned income, and 70 percent of the public wants to increase corporate taxes by eliminating deductions. Yet none of these policies have become law. Instead of prioritizing economic justice, over the past several decades, Congress has passed tax cuts for the wealthy and bailed out Wall Street.

Between 2007-2009, six out of the eight corporations that spent the most money on lobbying saw a seven percentage point decline in their tax rate compared to the 0.2 percent decline the median spending company received.

Political scientists Jacob Hacker and Nathan Loewentheil write that these large corporations saved an “estimated $11 billion — which, if entirely due to lobbying, would indicate a return on investment of over 2,000 percent.”