Many of us were brought up under the dark threat of nuclear war mushroom clouds. After the fall of the Soviet Union regime, many thought that the ominous possibility of an atomic war holocaust had passed. How wrong they all were, according to a new report from the Stockholm International Peace Research Institute (SIPRI).

The world’s nine nuclear armed states may have downsized their military arsenals, but made up for their loss by increasing the number of weapons on high operational alert. As a result, the world is increasingly within striking distance of nuclear weapons—either by accident or by design.

The nine countries collectively possessed an estimated 13,080 nuclear weapons at the start of 2021,  a decrease from the 13, 400 that these states possessed at the beginning of 2020 since some of these weapons have gone into “retirement”.

Despite this overall decrease, the estimated number of nuclear weapons currently deployed with operational forces increased to 3,825, from 3,720 last year.  2,000 of these—nearly all of which belonged to Russia or the US—were kept in a state of high operational alert ready for a strike.

The US and Russia continued to reduce their overall nuclear weapon inventories by dismantling retired warheads in 2020, both are estimated to have had around 50 more nuclear warheads in operational deployment at the start of 2021 than a year earlier. Russia also increased its overall military nuclear stockpile by around 180 warheads, mainly due to deployment of more multi-warhead land-based intercontinental ballistic missiles (ICBMs) and sea-launched ballistic missiles (SLBMs).

The  International Campaign to Abolish Nuclear Weapons (ICAN), warned that nuclear-armed states spent $72.6 billion on their nuclear weapons – even as the pandemic spread in 2020, an increase of $1.4 billion from 2019. Its report, Complicit: 2020 Global Nuclear Weapons Spending, shows how during the pandemic, which had devastating health and economic consequences last year, governments were increasingly channeling tax money to defence contractors, which in turn increased the amounts to lobbyists and think tanks to encourage a continued increase of spending.

Out of the $72.6 billion that countries spent on nuclear weapons in 2020 globally, $27.7 billion went to less than a dozen defence contractors to build nuclear weapons, which in turn spent $117 million lobbying and upwards of $10 million funding most major think tanks writing about nuclear weapons.

“The climate and Covid emergencies are showing us what we really need for our security and safety as human beings, and it’s not nuclear weapons,” said Dr Rebecca Johnson of the Acronym Institute for Disarmament Diplomacy. “The UN system is struggling because its efforts to build cooperative peace and security are constantly undermined and strangled by aggressive nation states. Most people can see we need cooperation and sharing to solve global challenges, from vaccines to sustainable resources,” she told IPS.  A minority of governments with nuclear dependencies and militaristic economies create the most dangers for everyone, said Dr Johnson. “With their aggressive posturing, new types of weapons and corrupt selling practices they arm rivals, feed insecurity and wars, and undermine international security, law and human rights, she warned.

Professor M. V. Ramana, Simons Chair in Disarmament, Global and Human Security, and Director, Liu Institute for Global Issues, School of Public Policy and Global Affairs at the University of British Columbia, told IPS the report documents the power of the political control wielded by companies involved in nuclear weapons production and maintenance is. These companies profit enormously from their involvement in making these weapons of mass destruction and use a share of these profits to lobby for and shape the decision-making process in ways that further their profits, and loosen any semblance of democracy in this sphere, he said.

The top 5 companies profiting from nuclear weapon contracts were: 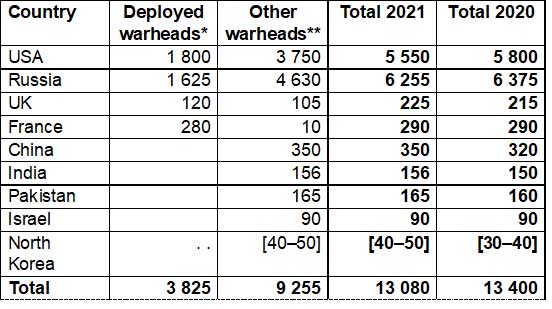