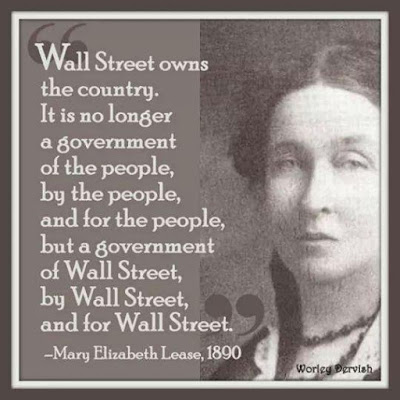 According to Silver Spoon Oligarchs: How America's 50 Largest Inherited-Wealth Dynasties Accelerate Inequality, a new report out Wednesday from the Institute for Policy Studies, the country's 50 wealthiest familie from 1983 to 2020 had amassed $1.2 trillion in assets. By comparison, the bottom half of all U.S. households—an estimated 65 million families—shared a combined total wealth of just twice that, at $2.5 trillion.

The fortunes of dynastic families increased at 10 times the rate of ordinary families.

For the 27 families that were on both the Forbes 400 list in 1983 and the Forbes Billion-Dollar Dynasties list in 2020 their combined assets have grown by 1,007% over those 37 years. This is an increase from $80.2 billion to $903.2 billion in inflation-adjusted dollars. In contrast, between 1989 and 2019, the wealth of the typical family in the U.S. increased by just 93 percent in inflation-adjusted dollars.

Since the start of the pandemic in March 2020, the top 10 families on the Forbes dynasty list have had a median growth in their net worth of 25%, researchers found. The amount of wealth held by the nation's 660 billionaires, who have seen their combined fortunes balloon by more than $1.1 trillion amid the Covid-19 pandemic.

According to the report, the children and grandchildren of some corporate executives—"who may be up to seven generations removed from the original source of their family's wealth"—tend to "focus less on creating new wealth and more on preserving existing systems that extract ongoing rents from consumers and the real economy."

"America's dynastic families, both old and new, are deploying a range of wealth preservation strategies to further concentrate wealth and power—power that is deployed to influence democratic institutions, depress civic imagination, and rig the rules to further entrench inequality," the authors wrote. "This tax avoidance means less support for the infrastructure we all rely on to preserve our health, safety, and quality of life."

Dynastically wealthy families wield a great deal of political power and use it to further their interests. Some dynastic families spend millions lobbying for favorable tax, labor, and trade policies. Several have corporate political action committees that give millions to candidates and campaigns. Many family members give to candidates and PACs; several serve on policy advisory boards; and a few have served in government themselves, including as governors, cabinet members, and even vice president.

Dynastic families exploit their philanthropic power too, through charities and foundations. The top 50 families have set up more than 248 foundations between them, housing more than $51 billion in assets. While many move much-needed revenues to broader public interest charities, others fund groups working to reduce taxes on the wealthy and roll back regulations that constrain corporate profits. Some funnel millions to donor-advised funds, which can fund dark-money political advocacy. And in a few cases, family members have used them to compensate themselves.

"Members of the Busch, Mars, Koch and Walton families have together spent more than $120 million over the past 10 years lobbying for taxation, labor, and trade policies favorable to their interests and investments," according to IPS.
Dynastically wealthy families "have gained massive and unaccountable financial, political, and philanthropic power... while giving relatively little back to the society that has enabled their fortunes."
Wealth Hoarding by 'Silver Spoon Oligarchs' Is Endangering US Democracy: Report | Common Dreams News
Posted by ajohnstone at 1:48 am