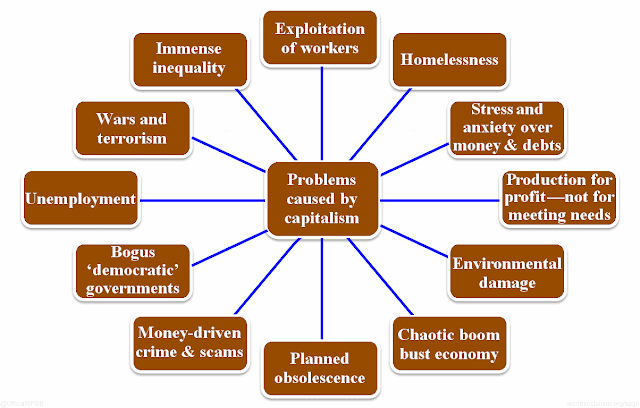 There are critics of capitalism who argue that the way out is for workers to form co-operatives. For many,  the cooperative movement as it exists today is associated with socialism and the struggle to overthrow the capitalist system of society. Co-operatives have in fact a long association with attempts by workers to improve their lot under capitalism.  The Socialist Party has no problem with workers forming cooperatives if that’s the best way they can survive under capitalism. However, we disagree with the sometimes-made claim that they can be a route to socialism because, aside from any political consideration, unless they are in a small market niche with no competition, they tend to be out-competed by the brutal cost and wage-cutting tactics of conventional businesses.

While we can sympathise albeit with a critical mind those cooperatives aimed at abolishing the wages systems, private ownership and profit-making we acknowledge the vast majority of the others merely wishes to redirect the flow of profits from the private owner or investor to the cooperative members. It has not and cannot solve the poverty problem either of its members or of its employees. The basic fallacy in the co-operative idea is a wrong explanation of rent, interest and profit. Because the means of production—land, factories, steamships, etc.—are privately owned, the workers who wish to operate these instruments must first enter into a one-sided bargain; one-sided because the goad of semi-starvation forces their hand. They bargain to produce wealth for the owners of capital and receive as the price of the energies they sell wages or salaries which, over the whole field of Capitalism, are only a small proportion of the values they produce. What the capitalists get is a property-income, something which arises from their monopoly and not from their services, and which varies according to the size of their capital. Rent, interest and profit, if the terms are cleared of some looseness which surrounds their common use, are merely names for this income that goes to the owners of property because they are owners.

Proponents of co-operatives want to eliminate the middleman and redirect the flow of profit—but what is profit? Profit is the child of private ownership and is obtained by the exploitation of the workers. Co-operative "divi" is derived from the exploitation of cooperative employees. The relation between the latter and the societies is precisely the same as that between other workers and their employers. The co-operative movement has all the trappings but none of the substance of success. Its members are still wage-earners, still exploited by the capitalist class and still, therefore, poor; its employees are in the same condition. If the societies as at present constituted extend until they cover the whole working-class that will still be true. It has made no inroads into the capitalist system.

Co-operatives have not and cannot emancipate the working class. Only socialism will do that. The workers cannot escape from the effects of capitalism by joining cooperative societies. They must obtain for society as a whole the ownership of the means of production and distribution which are now the property of the capitalist class. For this, they must organise in the Socialist Party for the purpose of controlling the machinery of government. Once possessed of power they can then reorganise society on a socialist basis of common ownership. The cooperative commonwealth can only be achieved by socialist methods.

Evicting the bosses from their directors' board rooms and organising production from the shop-floor without them is one thing; escaping from the economic laws of the market is another – as, within capitalism, it is not just a question of organising production, but also of selling what is produced. The cooperative model tends to operate within the capitalist logic of productivity and profitability … the pressure on them to adopt a capitalist business logic is immense. Cooperatives are embedded in the framework of the capitalist economy and compete on the capitalist market following the logic of profit-making.

Cooperatives do not provide a real solution to the workers’ situation. It is incapable of providing an answer in the interests of all workers. At no time does it question the capitalist production relationships – it questions only superficial features (management structures, for instance). Even less can a network of cooperatives create a parallel system to capitalism? The more coop members  have to discipline and pressurise themselves in the way the old bosses did – what we call “self-managed exploitation.” Workers in cooperatives have in effect to organise their own exploitation for profit to be accumulated as more capital. They are not the way out. As Marx pointed out, co-operatives ‘must reproduce everywhere in their actual organisation all the shortcomings of the prevailing system.’ And they do. Although Marx mentioned workers’ cooperatives as possible harbingers of the new society, he cautioned that, as long as they exist within capitalism, the cooperatives ‘naturally reproduce in all cases…all the defects of the existing system, and must reproduce them…the opposition between capital and labour is abolished here…only in the form that the workers in association become their own capitalist.’ On their own, there is nothing intrinsically socialist about cooperatives.

A co-op does not cease being a capitalist enterprise simply because votes are taken on how its assets are used within a society of generalised commodity production and wage labour. The imperative to accumulate with all the drive to minimise the labour time taken to do a task this requires remains even in a co-op. Thus cooperatives are under the same pressure to seek to maximise profit as a condition for surviving as an economic institution embodying capital. It is just that in their case the trustees – the functionaries of capital – are different: worker-elected boards.

Socialism takes over the means of production, by abolishing all sectional property rights over them and that includes members of worker-owned businesses and uses them to directly produce, without the intervention of buying and selling, what people need, both as individuals and as communities.

Another excellent class analysis. Thank-you. I will pass it on.

We have many Marxist scholars who appear to ignore what Marx cautioned against.

Richard Wolff is perhaps the best-known advocate of what he calls Workers Self Directed Enterprises and promoter of the Mondragon Cooperative. He is gaining a receptive audience while those such as ourselves are failing to effectively disillusion his followers even though there are almost 200 years of not theoretical hypothetical evidence but empirical proof of how cooperatives fail.

A quote I often use is from the times of the Chartists.

“I contend that co-operation as now developed, must result in failure to the majority of those concerned, and that it is merely perpetuating the evils which it professes to remove… That the co-operative-system, as at present practised, carries within it the germs of dissolution, would inflict a renewed evil on the masses of the people, and is essentially destructive of the real principles of co-operation. Instead of abrogating profitmongering, it re-creates it. Instead of counteracting competition, it re-establishes it. Instead of preventing centralisation, it renews it—merely transferring the role from one set of actors to another. Your co-operative ranks are thinned, your firms find, one by one, they can no longer in make the returns equal the expenses, they cannot sell as cheap as the capitalist, they can therefore no more command the market, their co-operative fires die out in quick succession, stores and mills close over their deluded votaries — and the great ruin will stand bald, naked, and despairing in the streets.” - Ernest Jones,

There was a good critique of Wolff's "WSDEs" in the Standard a few years back
http://socialiststandardmyspace.blogspot.com/2019/04/marx-co-operatives-and-capitalism-2014.html

Perhaps a special issue of the Standard in the future could focus on co-operatives, considering how Wolff's reformist illusions are exerting a huge influence these days.

Another good critique of Wolff is this one

Wolff is trying to modernize Marx.

The use of language beyond the knowledge of the common person.


Let's build a our community by asking and answering one question at a time:

-What is needed for life?

Marx was well aware of the cooperative movement, wouldn't you say, elcil? They had been around for decades.

I don't think Wolff is addressing Marx's critique of co-ops.

Wolff could be said that he is endeavouring to modernize the co-ops, redefining it with different language which resonates with an audience but many would actually say, he is, in fact, simply repeating earlier flaws.

America has had some of the largest and earliest cooperative projects, especially in farming and telecommunications, since the poor rural infrastructure meant people had to use their own initiative to acquire services.

Wolff could be said that he is trying to teach his granny to suck eggs.

Would you or I prefer to work in a co-op where our input is welcomed and we are directly involved in decision-making. Yes, naturally. We all seek respect and as individuals, we can sympathize with the self-management system of co-operatives. (From long years of work, I know informal positive working relationships arise, anyway, regardless.)

Who wishes to toil under a martinet manager who imposes a strict work-place discipline?

But does it change the economic system, or simply make wage-slavery a little bit more bearable, is the issue?

The laws of the exchange economy remain intact, cooperative enterprises are still competing in the market and as always the crucial aspects of this and as always it is the degree of surplus value extracted, ie wages levels and amount of productivity.

Well said , as always ajohnstone.
I have yet to find weakness in your arguments, not that I look for any. You do a fine job of using modest lay-speak. It is a most important skill.

The problem I have with Marx , et al. is the authoritarian technocratic dialog.
I am not an economist. I do not speak that language. Therefore, I do not properly understand it. This benefits the powers that be. It is overly complex and confusing and therefore not worth my time. Common people want the info as plain as possible. This is perhaps more important in the internet age.

You ask:
But does it change the economic system, or simply make wage-slavery a little bit more bearable, is the issue?

It seems to me, a flaw of thinkers, like Wolff and others, to "transition" from capitalism to communism. I think the people are willing to settle for chipping away at the system. Hoping for death by a thousand cuts? Perhaps it is possible. "Some day" is a favorite idea of the powers that be, I would argue.

We need a full stop of capitalism!

elcil, i think you yourself put your finger upon what is the real problem we all face when you say:

"I think the people are willing to settle for chipping away at the system. Hoping for death by a thousand cuts?"

Our goal is to turn communism into an immediacy, and not something that might be possible someday.

And frankly and sadly we aren't being too successful.

Those socialists of over a hundred years ago, still in the 19th Century saw socialism as something they might achieve within their lifetimes (or at least their children's). Nowadays, this generation thinks we just might possibly gain free universal healthcare and education and a hope to halt the degeneration of our environment. Worthy causes but hardly the world commonwealth once envisaged.

(you caught me on a pessimistic day, today, elcil)

for an hour or two

Our goal is to turn communism into an immediacy, and not something that might be possible someday.

I am doing everything I can to make it happen.