The top 1% of households globally own 43% of all personal wealth while the bottom 50% have only 1%.

The 1% are all millionaires in net wealth (after debt) and there are 52m of them.

The Credit Suisse global wealth report analyses the household wealth of 5.2 billion people across the globe. Household wealth is made up of the financial assets (stocks, bonds, cash, pension funds) and property (houses etc.) owned.  And the report measures this, net of debt. 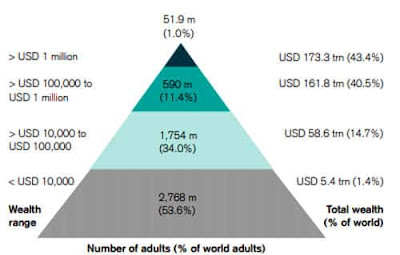 At the apex of the wealth pyramid, the report estimates that at the start of this year there were 175,690 ultra-high net worth (UHNW) adults in the world with net worth exceeding US$50 million.

Wealth differences within countries are even more pronounced. The top 1% of wealth holders in a country typically own 25%–40% of all wealth, and the top 10% usually account for 55%–75%. At the end of 2019, millionaires around the world – which number exactly 1% of the adult population – accounted for 43.4% of global net worth. In contrast, 54% of adults with wealth below US$10,000 (i.e. pretty much nothing)  together mustered less than 2% of global wealth.

1% own 43% of global wealth, while billions have no wealth at all – Climate & Capitalism (climateandcapitalism.com)

Posted by ajohnstone at 3:02 am