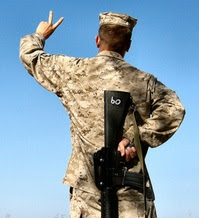 Erica Fein, advocacy director at the peace advocacy group Win Without War, said in a statement:

"First and foremost, the FY21 NDAA authorizes nearly three-quarters of a trillion dollars in Pentagon spending. As people across the world reel from a devastating pandemic, as families struggle to pay their bills, as communities of color go starved for resources, funneling billions more into an overpowered war machine is an act of utter inhumanity."

The women-led anti-war group CodePink said the military budget "out of control...the Pentagon is asking for a whopping $740.5 billion—more than half of the country's discretionary spending, the majority of this money goes directly to perpetuating violence, destruction, and endless war." It continued:

"The Pentagon's absurd budget harms Americans at home as well, by diverting funds that should be used to benefit the American people such as universal healthcare and welfare programs, and by fueling violence on our streets. Even the modest 10% budget cut many congress-people are calling for could vastly improve the lives of millions of Americans and lessen our country's damage abroad."

But it is perfectly acceptable to the political duo-poly and you have always known this, Bernie.

Posted by ajohnstone at 9:34 am