Don't be Blind to Biden 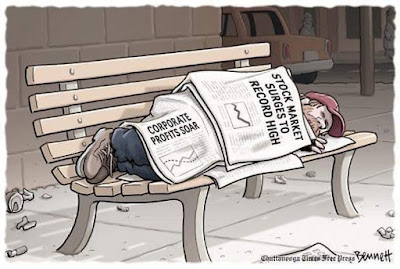 Much of the media concentrates its attention upon Biden’s capability to “heal” America after the divisiveness of Trump’s reign in the White House and the “coming together” really of America means an end to the internecine war-fare between sections of the ruling class and a return to the bipartisan duo-poly, rather than the ending the racial friction and the anti-migrant demagoguery. It means re-positioning America’s foreign affairs to represent the the overall interests of the Wall St corporations better. While protesters on the street call for de-funding the police, CEOs want the United States to act as the world’s policeman without the inconsistent and idiosyncratic direction to promote Trump personal political position. Across the world, America has lost its legitimacy in the eyes of the international capitalist class. Biden is now their great hope to revive America’s prestige.

Biden’s platitudes and his cabinet appointments indicate a return to an Obama corporate-friendly administration to re-assure investors that the economy is in a safe pair of trusted hands. It is “business as usual”, a return to normalcy. The threat of any sort of radical alternative has been averted. The Democratic Party is the political subsidiary of the ruling class and now a company-man is back in charge. Biden’s principle role is to heal what ails the ruling system at the expense of the working people without them being aware that thy are being sacrificed for the “greater good” of their masters. Biden will carry out policies on behalf of his own masters to inflict austerity and a race to the bottom to bring back profits for the capitalist class, and not just the few billionaires such as Bezos. It is not accidental that Biden’s incoming cabinet is dominated by corporate-operatives who will do the right thing by their masters. It is wishful thinking to believe the leopard has changed its spots. Biden’s cabinet picks have already revealed how forlorn were the hopes of lesser-evil apologists. It is Obama re-packaged and re-branded to sell to the American worker.

The United States needs socialism. And not Bernie Sanders-style “socialism” but the real thing and it certainly won’t be achieved by the likes of AOC or “the Squad.” In these times of the pandemic which has shown that the shared welfare of all communities and all countries must be served there is no better time than to advocate the case for socialism, a cooperative commonwealth. It is no longer free healthcare that is an issue, but free food, free housing, free education, free utilities and free transport, just to mention a few needs of the people which require to be satisfied. The coronavirus has exposed capitalism as a diseased economic system. Focusing  the lives and well-being of human beings, instead of the production of profits, makes for a better world.

Sometimes it takes a crisis to see clearly.

Posted by ajohnstone at 1:23 am