The only war we want is the class war


The Socialist Party aim is a cooperative commonwealth without State, without governments, without classes, in which the workers shall administer the means of production and distribution for the common benefit of all. The constantly rising cost of living, the growing unemployment, the savage repression of all efforts of the workers to better their condition, all these measures can have but one meaning for every intelligent worker. Everywhere the capitalists cry: “More production! More production!'’ In other words, the workers must do more work for less wages. Will the capitalists be able to do this? They will, unless the workers declare war on the whole capitalist system. To advance the system of exploitation the capitalists unite and chain the workers to the machines of industry. Capitalist society all together presents a solid front against the worker. We must end the institution of capitalist private property and make all wealth the property of all the workers in common. Fellow-workers of all countries must free themselves from wage-slavery. Liberals and progressives have proposed all sorts of remedies. But these reforms wouldn’t solve the problems. SO LONG AS THE CAPITALIST SYSTEM EXISTS SOME MEN WILL BE MAKING MONEY OUT OF THE LABOUR OF OTHERS. ALL REFORMS OF THE PRESENT SYSTEM OF SOCIETY SIMPLY FOOL THE WORKERS INTO BELIEVING THAT THEY AREN’T BEING ROBBED AS MUCH AS HE WAS BEFORE. The class-conscious workers of the world must prepare to attack and end capitalism at its root. Any worker can see this fact with his or her own eyes. the workers must first wrest the State power out of the hands of the capitalist class. They must not only SEIZE this power, but ABOLISH THE OLD CAPITALIST STATE APPARATUS ENTIRELY. The capitalist State is built to serve capitalism, and that is all it can do, no matter who is running it. Capitalism has only one function and that is to employ and exploit workers for profit. It is not particular about what it turns out in the way of merchandise, computers, aircraft, motors, fuel, ships or whatever, in fact many large financial enterprises have capital invested in a widely different range of goods; the common denominator is profit. To exact the greatest amount of profit from workers more and more is the worker made the appendage of the machine and the machines become more costly as the employers vie with each other and their foreign counterparts for a greater share of the markets which depends on production costs being competitive.


Technology is the creation of the working class. It derives from the skill and the labour of workers whether they be employed in the drawing office, laboratory, experimental departments, or the factory-floor production lines. But the employing class owns it and appropriates the benefits for itself. The manner in which this technology is used in the form of ever more sophisticated machines and plant, the competition to be ahead in the never-ceasing struggle for markets and hence profit has led to what goes along with increased technology, the growth of giant companies brought about by takeovers and mergers which concentrate capital in fewer hands and put more and more machinery behind fewer and fewer workers. 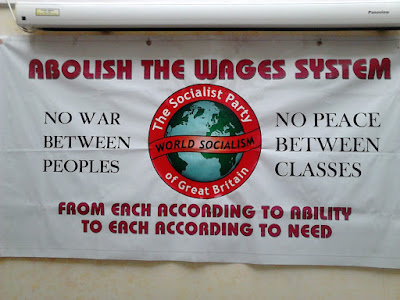