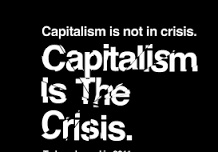 7.30pM, Monday, 11th February
Unitarian Church,
High Street, Swansea
SA1 1NZ
The Socialist Party has always maintained that the change from capitalism to socialism would be a fundamental change, that is, we would have a complete reorganisation of society, that this change would not be a question of reform; that the capitalist system of society would be completely changed and that that system would give way to a new system of society based on the common ownership of resources, both natural and man-made.
The Socialist Party maintains that capitalism is unable to solve the problems and contradictions that spring up because of its production for exchange and profit. What is capitalism? Capitalism is that system of society in which the means of production and distribution are owned by a few individuals for their own proﬁt. You take for example, the large industrial plants, you take the land, take transport, you take all of the factories that have to do with production, take all the means of distribution, and you will discover that they are owned by a few individuals or corporations, by ﬁnancial institutions, for the proﬁts that can be derived from these institutions.


The Socialist Party maintains that all our institutions are based on labour-power of the working people, all the factories, the mines, the land, and all means of production. Labour-power is essential to make them valuable and to provide proﬁts for those that own and control them. All of our institutions are based on the labour-power of working men and women. Without that labour-power society could not exist. Not a wheel could turn. Value could not be produced. All the benefits of our wonderful civilisation has been the result of the creating ability of the working men and women who use brain and muscle power. The capitalist class controls the creative power of labour for its own advantage.


The Socialist Party recognises that the working class cannot be free, and cannot be emancipated unless democratic control of industry is established.
Posted by ajohnstone at 1:37 am