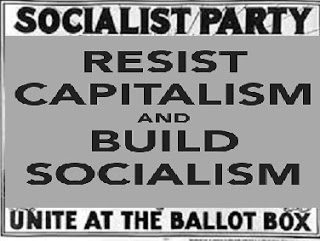 Our fellow-workers must face up to the fact that all capitalism has to offer them is poverty, malnutrition, war and wage-slavery; and that neither they nor their families have any hope or future under capitalism. The choice put by capitalism to the working class to-day is the grim choice of “starve or rebel.” There is no need for a single worker to be overworked or should lack the necessaries of life. Nothing except the existence of capitalism prevents them building up for themselves a decent and secure world. Capitalism must be overthrown to get this. It is only possible by the building socialism, can peace and prosperity, happiness and new life to the whole population be achieved.


All over the world the tide of working-class resistance is now rising. The unity of the working class in struggle makes the capitalists retreat. They give ground. They quarrel amongst themselves. Beaten back in their attack on the working class, they begin to prey on one another. Conflicts arise and the capitalist class as a whole gets into a state of crisis. The authority of the capitalists disappears. The workers have the power to overthrow capitalism. It is the capitalists who are powerless, powerless to move a single inch towards the essential reconstruction of society. It is the workers who are strong from the very moment that they unite and resist.


The capitalist class will be deprived of their ownership and control of the factories and workshops, mills and mines, and transport. All these means of production which they have used and misused only to pile up profits for themselves and poverty for the workers will be taken from them. The needs of all will be met, and new needs and pleasures now denied to the working class will be created and satisfied by a socialist organisation and extension of production.