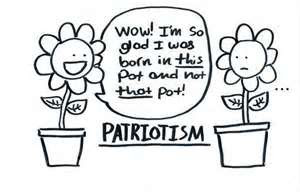 
Trump is a patriot. Nigel Farage is a patriot. Maduro is a patriot. Corbyn is a patriot. You, too, often declare yourself very sincere in your patriotism, but so also do they. So, there must be something seriously wrong in the very conception of patriotism, which can lead all those men to pursue such contrary and often contradictory goals under the label patriot. The distinction between “legitimate” and “illegitimate” patriotism is in practice impossible of definition. The person whose patriotic tendencies are strong in a crisis invariably drifts into the attitude “my country right or wrong.” This country is not "our" country. Why should the property-less love it or fight for it? Why sign the title deeds of our masters in the blood of our fellow-slaves?


Patriotism may have had some meaning in small local communities where the principle of all for each and each for all has not entirely lost even its economic significance. But in the modern nation-state, it is a masquerade. No socialist can consistently love of his or her own capitalist State to the detriment or disparagement of other peoples.


We all know what patriotism means. A gang of thieves by fraud or otherwise lay hold of the power of the State, and with that power in their hands proceed to start a quarrel with another people, whom they consider sufficiently weak and defenceless to be a safe prey, in order to enrich themselves and the class they represent by the plunder and enslavement of the people. But the common citizen must on no account condemn their actions, otherwise stands accused lacking loyalty and patriotism. On the contrary, like all true “patriots,” we must cheer them on with “Rule Britannia” or with “The Marseillaise” or “Star Spangled Banner” as the case maybe.


We must further rejoice in the victories of “our” country’s in war or sport and be duly down-hearted and desolate by defeat, even though we derive no personal benefit either way.  This is patriotism as expounded in the media. But to the reasonable person it not difficult to see that calling someone a patriot is a polite way of saying that he or she is a fool. The principle of patriotism – of “fatherland” or “motherland” –is not important, socialist principles are. The task of Socialists is to rid mankind of accursed patriotism. Patriotism is prejudice. Perish “the Patriot”


Patriotism like religion refuses to be questioned, and is known for its extreme sensitivity and its fanatical intolerance. Patriotic rituals and ceremonial observances are enforced with zealous laws, and those who flout them are ostracised. For socialists, patriotism, in all its forms, is distasteful. Socialists possess no national sentiments within our hearts. The love for the country of our birth is foolish and absurd. When socialists loves his or her native land then they equally love other people’s native lands, as well. If we love our fellow native-born, then we also love the foreigner. The working class is hoodwinked and duped in this country and elsewhere by patriotic cries, and hasten the day when the workers of the world finally abandon the national flags of their masters, and muster themselves under the red banner of world socialism and international brotherhood.


The “class war” whether waged economically, we recognise. But we have no sort of sympathy with any other warfare pursued under whatsoever specious pretext, be it opening up markets or securing natural resources or safe-guarding trade routes.


We anti-patriots fight, not for the political independence of one nation, but for a new society for all peoples – for the socialist commonwealth. If we can love a British nation of sixty-five millions, the vast majority we do not know then why not love all seven billion of humanity in the same way.


We in the Socialist Party honour Wat Tyler, John Ball, Jack Straw, of the Peasant Revolt, and the soldiers who took part in the Putney debates during the English Civil War and all those Levellers and Diggers who tried to create a free commonwealth. We honour the Chartists, who struggled for the vote, the Tolpuddle Martyrs and others who fought for the right of workers to organise in unions. We pay our respects to those who refused to be conscripted during the world wars and declined to kill their fellow-workers of other lands. The Socialist Party’s reserves its homage to those of our own class, regardless of nationality, such as the Paris Communards, those workers who sacrificed their lives against the Russian Tsar and the Red Tsars that came after, the American strikers shot down by the bosses’ militia. Sadly, the list of workers martyrs goes on and on. These are the people we pay tribute no, not kings or queens or presidents.
Posted by ajohnstone at 12:00 pm