Yet another Sunday sermon 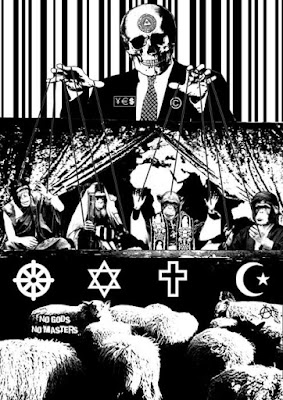 Religion involves a belief in a god or gods, from whom humans may derive benefits or punishments. Socialism is the protest against unreality, against the delusive shams which once masqueraded as truth. Socialists to-day affirm the principle of human solidarity without resorting to mystical commandments. Religion is necessary to the class state and to class society in general. And, as such, can only perish with it. Hence, no amount of merely expository or destructive criticism, useful and necessary as such criticism is in itself, can finally destroy religion. Only the coming of a class-free society can do that, by abolishing the social antagonisms which necessitate its existence. It is from this standpoint that religion has been studied by the Socialist Party which uniquely does not accept people who hold religious beliefs as members. The Socialist Party does not propagate or support religious doctrines or institutions, considering them harmful to the real interests of the working-class.


A fundamental tenet of our organisation is our conception of social consciousness. God as supreme consciousness is a projection of human consciousness. The human mind seeks to understand and explain the world. Prior to any scientific development, various creation myths provided an explanation for how the world began through various kinds of metaphors, projections arising from very basic experience into areas that cannot otherwise be conceived by the human brain. In some cases, creation is thought of as giving birth. In other cases, the metaphor is taken from the very human operation of making tools. God made the world the way people make tools. The content of any conception of God, if it is to have any particular meaning besides the very abstract “infinite” or “all-powerful” or “all-knowing,” has to come from the believer’s own experience in the world. For example, the believer may think that if God is infinite, then God must be perfect. If God is perfect, then God is “good.” If God is good, then God must support what I know to be good and oppose what I know to be evil. But what I know to be good and what I know to be evil come from my experience, not from revelation from God. So the believer projects into the conception of God all kinds of attitudes which in fact were originally generated within the believer himself.


Fatalism is based on the assumption that everything in the world and in people's lives is predetermined by natural or supernatural forces, that there is a rational being which sets the goal for everything that happens in nature, and that this being is called god. Everything in the world is predestined and no one is responsible for what happens. Fatalism has a crushing effect on the individual. Fatalism links up with religion, which asserts divine predestination. Both fatalism and religion grant human beings only a predestined role along with the illusion that they are acting independently. Absolute surrender is what is expected of every individual. Religious and superstitious people generally, proceeding from the idea that we can't get away from fate, adopt the standpoint of fatalism. The idea of fate is kept alive by astrology, the principle of man's being part of the picture of the universe, whose forces determine the logic of human life. This form of belief in fate assumes that a person is born under a certain star and thus receives a certain programme in life, including even his personal qualities. Many political leaders, the "men of destiny", believe that politics is pure fate. The idea of fate thus became symbolic of the pessimistic demand for activity at all costs. Though such activity was bound to be futile, people had to do something all the same. Then there is the role of heredity that we are predetermined by a sperm inseminating a egg from which a person develops, and that the conditions of our life play hardly any role or perhaps none at all. From this fatalistic principle of DNA fatalism several practical conclusions are drawn. One can do nothing about inherited proclivities and diseases, because no one can change ancestors.


The function of religion in general, is to relieve the believers of responsibility for their actions. It is not they who are acting, it is the God (or Satan) who is acting in and through them; They cannot criticise, modify or change the world; they, like the world itself, is merely the vehicle of an alien power. Similarly, the capitalist operates according to “eternal laws” of the market forces to which he and all men are helplessly subjected which is an argument powerful in keeping men riveted to their roles. “The laws of commerce,” Marx quotes Burke as saying, “are the Laws of Nature, and therefore the laws of God.” A profitable confusion indeed: “No wonder,” Marx comments caustically, “that, true to the laws of God and Nature, he always sold himself in the best market.” Capitalism develops “a working-class which, by education, tradition, habit, looks upon the conditions of this mode of production as self-evident laws of nature.” The capitalist “laws of the market” describe are far from being eternal and necessary, that in fact they are only recent innovations, the outcome of specific historical events.
Posted by ajohnstone at 4:06 am