ROUGH WINDS DO SHAKE THE DARING BIDS OF MAY! (weekly poem)

ROUGH WINDS DO SHAKE THE DARING BIDS OF MAY! 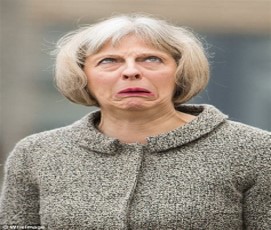 (apologies to the Bard)

Although Mrs May secured a majority in the 1922 Committee
vote to remain as leader, it was on the basis that she steps
down as the Prime Minister for the next General Election,
irrespective of any last minute bids to improve the Brexit deal.

Shall I compare thee to a winter's day?
Thou art more lonely and more desperate:
Rough winds do shake the daring bids of May
The P.M.’s lease hath all too short a date:
Once hot the aye for Brexit barely shines,
Too often now it's fools-gold has been dimmed.
The bright forecast continually declines,
As folk realise, at last, they're being skimmed:
Thus May's infernal bummer will soon fade,
She'll lose possession of the Ulster coast;
And soon will wander in the nameless shade
Ignored by everyone that heard her boast:
So long as folk can breathe or eyes can see,
She'll be lampooned along with Mrs T.!

© Richard Layton
Posted by ajohnstone at 6:00 am