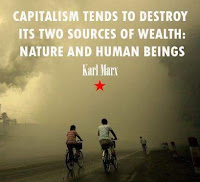 On 5 December 2018 social and print media published news of a press conference at the United Nation’s COP24 climate change conference held in Katowice, Poland. The news and a short video rapidly became viral on social media with large viewership and shares. The centre of attraction was a brave and articulate young girl, Greta Thunberg aged just 15, a young climate activist from Sweden. Sitting by the side of the UN general secretary, she uttered some rousing truths which at the first instance made us delighted. She blamed all political leaders of past and present generations for the catastrophic climate changes which have brought the whole human civilization and nature that environs us to the brink of disaster We could not but only congratulate her courageous words, ‘We have not come here to beg the world leaders to care for our future. They have ignored us, they ignored us in the past and they will ignore us again. We have come here to let them know that change is coming whether they like it or not.’

Yes we understand that a change is necessary. A radical change is essential in our thinking, leading to a radical change in our socio-economic system to save the Earth, life and human civilizations. But for that, we have to replace the existing profit-based, exploitative, oppressive, manipulative, disruptive and dehumanizing capitalist society with our much-awaited socialist society. A worldwide association of humans irrespective of nationalities, race, ethnicity, and sex has to be organized, which will function on the basis of participatory democratic principles. The socialist, resource-based sustainable economy will produce things as per social needs with democratic control over the means of production and distribution. Preserving ecological balance is only possible in a world socialist society.

The most serious barrier is the prevailing capitalist mode of production. It’s the responsibility of the working class, the creator and sustainer of human civilizations, to protect it by establishing world socialism democratically with the force of our immense majority. But our valiant young girl’s remedial prescription made us disheartened and apprehensive. Before the commencement of the summit, as a mode of protest, she has been organizing her schoolmates for a school strike on every Friday and sitting in a demonstration outside the Swedish parliament.

The demand of her climate movement is to compel the Swedish government to implement the Paris agreement to reduce the carbon emission to check global warming within a safe range. Till then she will continue to sit and demonstrate in front of the parliament with her schoolmates weekly on a specified day. She also made an appeal to children all over the world to sit and demonstrate in front of their national parliaments to make people aware of the dangers of climate changes. This is no doubt a praiseworthy initiative but we would like to express our concern that she might used by the capitalist class to channelize people’s anguish into a reformist blind alley.

In the first week of October 2018, the United Nation released an alarming report that we have only twelve years left to prevent a catastrophic climate change that would wreak havoc on the world population and environment.  But are the climate changes sudden? Scientists have been warning world leaders from 1977 about the threat, when the climate changes were not even talked about much. But the corporate businesses that are responsible for most of the world carbon emission successfully ran a campaign to suppress the climate facts and worked to keep the United States from signing Kyoto protocol, which helped China and India, two other giant emitters of greenhouse gas, to avoid signing.

The capitalist propaganda machines are spreading the illusion that ‘carbon tax’ on emission will reduce the use of fossil fuels and encourage the entrepreneurs to use clean energy, but this is not going to happen. In socialism, which is the only scientific and lasting solution to these climate catastrophes. Nevertheless, as long as capitalism persists, the logic of market economy cannot reduce their chunk of profits out of the use of cheap fossil fuels but would plan to make money even out of natural calamities. Natural calamities can ruin an individual capitalist but it’s good for the capitalist class as a whole because it’s good for the markets.


The exact class which is actively cranking up the global thermostat that threatens to inundate 20 percent of global population is actually controlling the United Nations and parliaments of different nations. So we think we, the working class, should expect nothing from the ruling minority capitalist class but should rapidly organize ourselves into a political party of our own on global basis with the aim of establishing socialism worldwide democratically; which is the only way out for human civilizations to survive.