There is an alternative

To leave the allocation of most resources to the market is incompatible with the realisation of environmental goals. The market responds only to those preferences that can be expressed through buying and selling. Moreover, a competitive market economy is necessarily oriented towards the growth of capital, and such an orientation is incompatible with a sustainable economy.  Capitalism, with its built-in mechanism of seeking profits to accumulate more and more capital, is the cause of environmental problems and that therefore no solution can be found to these problems within it.

The Socialist Party has described socialism in terms of abundance and there are those in the environmentalist groups who interpret this as meaning that socialism will be a society of ever-increasing personal consumption, of people coming to consume more and more food and to acquire more and more personal goods, a consumerist cornucopia. But what the Socialist Party means by a “society of abundance” is that enough food, clothing and other material goods can be produced to allow every man, woman, and child in society to satisfy their likely material needs. It is not a reference to an orgy of consumption, but simply to the fact that it is technically possible to produce more than enough to satisfy everyone’s needs.

Meeting everybody’s material needs will indeed involve in many cases an increase in what people consume. This will certainly be the case for the for the millions and millions of people in the so-called Third World who are suffering from horrendous problems of starvation, disease, and housing. So, yes, socialism will involve increases in personal consumption for three-quarters or more of the world’s population. Impossible, says some eco-activists because this would exceed the Earth’s carrying capacity and make environmental destruction even worse. Not so, is our answer.

This will allow room for the personal consumption of those who need it to be increased to a decent level. Diverting resources to do this — and ensuring that every human on the planet does have a decent standard of living will be the primary, the initial aim of socialism — will put up consumption per head again, but to nowhere near the level now obtaining under capitalism.

After clearing up the mess inherited from capitalism, then both consumption and production can be expected to level off (and even decline) to something approaching a “steady-state economy”. In a society geared to meeting human needs, once those needs are being met there is no need to go on producing more.

It is true that this assumes that population levels will stabilise too. This is a reasonable assumption, and is already beginning to happen, even under capitalism, as in the most developed capitalist parts of the world of Europe, North America and now Japan, fertility rates are reducing. Population growth now only feature in the poorer parts of the world, suggesting a link between it and poverty and the insecurity that goes with it (the more children you have the more chance there is of someone to care for you in your old age). The way to end population growth is to eliminate poverty and economic insecurity, which in practice can only be done by socialism. Unless prosperity of the people in the poorer parts of the world is increased, then population growth there won’t slow down. If you reject socialism all that is left is to envisage either compulsory sterilisation or letting starvation, disease, and wars take their course. 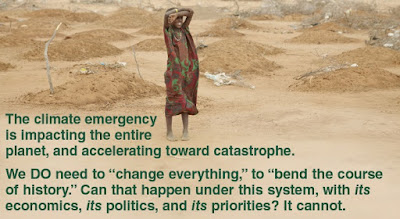