Marx and Engels on the Environment 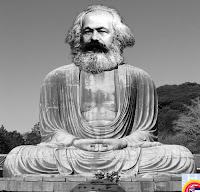 As with other aspects of life under capitalism, the Socialist Party has important things to say on climate change.  Moreover, many in the Green movement have begun to see through the profit motive and may well be a receptive audience to what the Socialist Party has to say.  Making meaningful contributions on the debate on the environment requires the Socialist Party to be fully aware of the issues at stake and the claims that are being made. We demonstrate how capitalism’s economic priorities prevents proper attention being paid to ecological considerations and we say that production for need can be the basis for a sustainable relationship between humans and the rest of nature while the way a socialist society, operates avoids the waste of capitalism , and permits resources to be rationally allocated and husbanded, via the practice of ‘conservation production’.

Too many “progressives” have failed to register that the socialist concern with or environment goes back to our Marxist origins.
The Communist Manifesto argued for:
“Combination of agriculture with manufacturing industries; gradual abolition of the distinction between town and country, by a more equable distribution of the population over the country.”

While in Capital Marx wrote:
“Capitalist production, by collecting the population in great centres, and causing an ever-increasing preponderance of town population, on the one hand concentrates the historical motive power of society; on the other hand, it disturbs the circulation of matter between man and the soil, i.e. prevents the return to the soil of its elements consumed by man in the form of food and clothing; it therefore violates the conditions necessary to lasting fertility of the soil.  By this action it destroys at the same time the health of the town labourer and the intellectual life of the rural labourer.”…
“...all progress in capitalistic agriculture is a progress in the art, not only of robbing the labourer, but of robbing the soil; all progress in increasing the fertility of the soil for a given time, is a progress towards ruining the lasting sources of that fertility.  The more a country starts its development on the foundation of modern industry, like the United States, for example, the more rapid is this process of destruction.  Capitalist production, therefore, develops technology, and the combining together of various processes into a social whole, only by sapping the original sources of all wealth- – the soil and the labourer….”

Nor did Engels, Marx’s collaborator, neglect the environmental problem, offering an insightful observation in “The Part Played by Labour in the Transition from Ape to Man.  He argues that animals change external nature as humans do, but without intending to do so, whereas humanity’s effect on nature is more planned and directed towards definite ends. After writing that human beings can master nature, he then qualifies this conclusion.

“...let us not flatter ourselves overmuch for our human victories over nature.  For every such victory it takes its revenge on us.  Indeed, each in the first place brings about the consequences on which we counted, but in the second and third place it has quite different, unforeseen effects which only too often cancel out the first ones…  At every step we are reminded that we by no means rule over nature like a conqueror over a foreign people, like someone standing outside nature -– but that we with flesh, blood and brain belong to nature and exist in its midst, and that all our mastery of it consists in the fact that we have the advantage over all other creatures of being able to know and correctly apply its laws…”

Engels points out that capitalist production is concerned only with immediate effects, both natural and social
“...Classical political economy, the social science of the bourgeoisie, is predominantly occupied with the immediately intended social effects of human actions directed at production and exchange.  This fully corresponds to the social organisation of which it is the theoretical expression.  As long as individual capitalists produce and exchange for the sake of the immediate profit, only the nearest, most immediate results can be considered in the first place…  In relation to nature, as to society, the present mode of production is predominantly concerned only about the first, the most tangible result.  Why should one be surprised, then, that the more remote effects of actions directed to this end turn out to be of quite a different character, and mainly even of quite an opposite one…”

This view is remarkable for its time, and remains valid today. Although not totally ignored by activists in the green movement who sometimes present quite a radical critique of production for profit.  Unfortunately, their critiques are not applied consistently with both their short-term and long-term aims firmly wedded to a form of capitalism. Nevertheless, their concern with how society can be organised so as to satisfy human needs and serve ecological ends must lead them to ask more probing political questions.