Socialism Is The Way Out 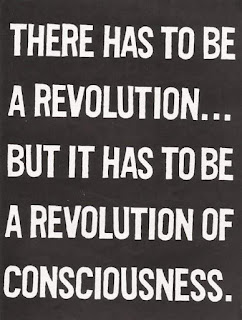 Our consciousness is roused by our inevitable conflicts with the forces of capitalism in our daily (particularly working) lives. How we interpret that experience, however, and what sort of political action (if any) we take depends very much on the information and the intellectual tools at our disposal. We should perhaps talk in terms of "subjective" and "objective" class consciousness. Subjective class consciousness (“consciousness in itself") perhaps relates to ways of thinking and feeling born out of daily contact with capitalism and expresses itself in such vehicles as trade unions, friendly societies, and perhaps political parties other than the Socialist Party. Objective class consciousness, on the other hand, should perhaps be seen as a culmination of struggles with capitalism and expresses itself in terms of the abolition of capitalism by workers ("consciousness for itself"). Engaging in the daily struggles of other people/groups is all very well if they invite you to do so or ask for your help. Otherwise, it is false. Instead of building working class solidarity, this creates suspicion and mistrust. Countless examples of manipulation of trade union activities by left-wing groups have demonstrated this. Every socialist has more than enough to do in being active in his/her own daily struggles and in spreading socialist information and ideas.

Many have said socialism will make no headway with the workers until religion had been eradicated from their minds. We have never belittled the power of religion when used by an unscrupulous ruling class to befog the minds of those they ruled. Furthermore, we assert that it has been consciously used as a bulwark to discourage active thought by the workers on the why and wherefore of capitalist supremacy and privilege. We do not dispute the fact that socialism cannot be achieved by a working class that believes in the supernatural. Socialism is based on the scientific interpretation of history. Religion is part of that history and is the result of man's ignorance of natural forces. With their progress in the knowledge of socialism, the workers must, therefore, shed their superstitions and become materialistic in their outlook.

Almost from the beginning of social life men an women have thought and planned for an ordered relationship in their dealings with each other. But a changing environment has always defeated them. In their struggle with nature for the necessaries of life, the discoveries they made always changed the nature of the problem. There could be no resting place. No period in history where they could truthfully say, "There will be no more history." Where conditions were static and man's relations within society could be determined once and for all. This has always been the dream, not only of Utopians, but of every despot and every class, throughout the ages, that has achieved power. Their dreams and plans have passed with them. Has the present ruling class any hope of achieving stability? Does society at present show any signs of being able to control and regulate the production and distribution of wealth on lines satisfactory to all? Emphatically no.

There is only one way out. That is to abolish capitalism and establish socialism in its place. End private property society that robs us of the wealth we produce and establish a worldwide society that is based on common ownership and in which there will be no capitalist or working classes, no owners and non-owners, no wage workers and no money. This society is coming, but it will come all the quicker if you join with us in our work for socialism.

The Socialist Party indicts capitalism at the barrier to progress and civilisation. There can be no common interests between those who own the factories, mines, mills, and land, with the workers who do all of the producing. One class does all the work, produces all, suffers all the hardships necessary to accomplish the task. The other class owns, but does not know, nor cares to know, how to produce wealth, yet persists by rights that it labels “legal” and otherwise to live upon what it does not produce. One class works long hours under conditions generally and necessarily established by and suitable to the masters of industry, receives low wages, so that there may be high dividends and profits for the masters. For it must be borne in mind longer hours mean greater wealth produced, low wages mean greater profits for the capitalists. Shorter hours mean less production by each worker or group of workers, therefore the expense to the masters is greater to produce a certain amount of wealth. High wages, shorter hours, better shop conditions that will protect life and limb are objected to by the capitalist for a thousand and one “reasons,” but really because it all means greater cost—thus less dividends—resulting in less palatial mansions, less limousines, less yachts, less private jets. The exploitation of people causes suffering and misery while environmental destruction results in degradation on a vast scale. The Socialist Party argue these problems are fundamentally caused by our economic and political system: capitalism. There are reasons for hope. Despite the divide-and-rule tactics used by politicians, more and more people are recognising the connection between social and environmental issues. Progress might be slow and patchy but steadily people are listening to the message at the heart of socialism.

It is common to describe members of the Socialist Party as dreamers, and thereby remove them from the sphere of practical politics. As socialists, we insist that we are practical, that we are working for something now and not in the dim and distant future. In fact, we insist that, from the workers' standpoint, we are the only practical people because we have the solution to all the economic evils that baffle our rulers, and our solution is one that can be applied now. To apply this solution all that is needed is the understanding by the majority of the workers of the few basic ideas. When the taunt is flung at us that socialism is a dream, what is really meant is that the workers have neither the capacity to understand nor to apply socialist principles and that socialism, as a system, is not capable of being run by human beings.

For those who shrink at the thought of social change and the overthrowing of the Establishment, let them take heart. Revolutions are terrible things. They upset society but the socialist revolution will not shake society to pieces; it will simply break the shackles of property and, with them, the ties that bind down the majority of people to lives of unending toil in return for the mere necessities of existence. Socialism offers a quick, easy, and certain road out of the economic evils that afflict the workers to-day. For its accomplishment, it requires the understanding and mutual co-operation of the mass of the workers.
Posted by ajohnstone at 6:00 am