A Song in Your Heart 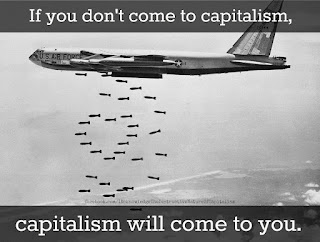 When we lived in the country the American airmen from what is still called RAF Upper Heyford were always welcome at village functions. They were pleasant, wanted to fit in and always brought a good supply of burgers from the PX Store for the barbecue. Recently Upper Heyford staged an air pageant. The American male’s supposed sexual prowess was celebrated by car stickers with slogans like “Helicopter Pilots Get It Up Quicker” and “Power Pilots Get More Thrust” and T Shirts stating plainly “F . . . Me”.

However the song book of the 77th Tactical Fighter Squadron — on sale to all, including children — did give pause for thought. Pages of outright obscenity are interlaced with songs which should set you thinking about the real purpose of the USAF presence in Oxfordshire and the sort of mental training which must be part of the curriculum of these pilots. Examples like “Phantom flyers of the sky/Persian pukes prepare to die./Rolling in with snake and nape?/Allah creates but we cremate” would explain why those who bombed Libyan civilians thought they were doing great. The Heyford’s Own Victor Alert Song “Reading our prono and picking our asses/checking our forms out and passing our gasses?/Silver Sleek B-61s slung below/ Nuclear war and we’re ready to go” and “Burn all those Ruskies” and “killing those Commies, we’re having some fun” seem, at the very least, out of step with President Reagan’s posturing in recent months.

When Colonel Robert Brus of the US Third Air Force Public Affairs Division was asked if this was the public image the USAF really wanted to project, he agreed the book was in poor taste and would not in future be sold on Open Days. No second thoughts, apparently, on the thought processes which produced those lyrics.

Meanwhile, down the road, The Three Horseshoes has a sign outside “Polite Notice. No CND Supporters Welcome. Thank you”. We don’t know if it is considered that CND thought processes would contaminate the minds of his locals or whether it would be bad for business to have them around.

Thanks for posting this Eva. I think you should buy a copy of that book for the Head Office library. I'm sure the librarian Roy Bean would reimburse you. I'd be interested to read it.