Destroying What Feeds Us

Greta Thunberg's visit to the UK is over and finished with a meeting to address British politicians. It was standing-room only, far different from the recent climate debate in parliament, which drew barely a dozen MPs even though it was the first on the climate crisis held in two years.

“This ongoing irresponsible behaviour will no doubt be remembered in history as one of the greatest failures of humankind. You lied to us. You gave us false hope. You told us that the future was something to look forward to.” She explained, “The UK’s active current support of new exploitation of fossil fuels, like for example the UK shale gas fracking industry, the expansion of its North Sea oil and gas fields, the expansion of airports, as well as the planning permission for a brand new coalmine, is beyond absurd.”

Later, MPs held a debate on the floor of the Commons about the recent Extinction Rebellion protests and student strikes.

Unimpressed, Thunberg said afterwards that the politicians were missing the point. “They turn this into a question of what methods the protesters use – truancy and civil disobedience – but it’s not about that. It’s about the fact that we face an existential crisis.”

Capitalism has been reformed many times and in many different ways and still it continues to progressively worsen the environment and in no way are things fundamentally changing for the better, neither for people nor for the environment. It would be correct to say that socialists view almost all of society’s problems as the inevitable outcome of the capitalist system. The threats and damage caused to our environment, become for socialists a symptom. A system based on profit and continued growth at all costs, places unsustainable demands on the planet's resources – and, in the end, must logically cause a civilisation collapse. And yet, faced with irrefutable evidence of catastrophic damage, the vast majority of people are not able, or perhaps don't wish, to make the connection.

On the face of it the environmentalist movement has a lot in its favour. It is difficult to find fault in their concerns about how the planet is being abused. But is the solution that would save the planet from through a series of legal enactments. Prescriptions by environmentalists for people to change their lifestyles – to  reduce their consumption of meat, to use public transport rather than private vehicles – will not resolve the crisis. The question of ‘how can we maximise profits?’ currently gets priority. This short-termism has prevented progress on a whole range of environmental issues. Which methods are sustainable? Environmentalists rightly show how many of our current methods of production are not ‘sustainable’ in that they damage the environment for future generations and they have offered many alternatives. Such methods could only be used to their full when we remove the market forces that drive producers to the short-term, cheap methods.

Capitalism depends on the drive for profits, which must take priority over everything else. Capitalists compete with each other in the market place and have to keep their costs to a minimum, otherwise they may lose out to their competitors and their businesses may fail. Green measures that may increase business costs will have to be ignored. Nation-states face the same pressures, as they compete on global markets. Governments, which look after the interests of their respective capitalists, seek to protect their lucrative extractive industries. For capitalism, the natural world is an unwanted hindrance to expansion and growth and the ravaging of ecosystems it is of no consequence to capitalism if it means increased profit and productivity. This concern for profits before people is perfectly permissible under capitalism.

What’s so wrong about capitalism is how a global fall or rise in the price of even one key commodity can reverse global policy overnight. How is humanity supposed to plan for the future, given capitalism's yo-yo economics? How are we supposed to make our civilisation sustainable, and guarantee a planet in good health for our descendants? We can’t. For that we would need a steady-state economy, with patterns of production and consumption that didn’t depend on the stock-market investors. Gambling on share prices is no way to run a planet.

We, the working people, must organise quickly to plan production in a rational environmentally friendly way according to human need. Capitalism’s relentless conditioning of people to believe that the way to happiness and fulfilment is the consumerist-obsessed acquisition of more stuff would be a forgotten malaise of the past, the idea that everything needed to be led by an economy and profit an outdated and arcane notion. Socialists no longer seek to conquer and dominate nature but to live in harmony and in symbiotic relationships with the world around us. Socialists are environmentalists who seek a non-exploitative economic system that permits co-operation and collaboration between people, and that recognises the mutual benefits when we also fully understand the responsibilities of our stewardship of the Earth. Our society and our way of life need to be in harmony with nature, not always battling against it, because in a war against the planet and nature there can only be one winner, and it will not be us.

While the non-violent direct action and civil dis-obedience tactics of Extinction Rebellion may achieve limited success, at the end of the day they will never be able to combat the motive of profit which is the root cause of the problems they wish to ameliorate and are destined to struggle endlessly against. Anyone who is concerned for what is happening to our environment can now have no reason for standing aside from the case for the abolition of capitalism and its replacement by a social system where people are the priority. Our aim is to sharpen the protesters’ anti-capitalist views to focus our message that capitalism is the enemy, its politicians included and that the capitalist system must be ended. 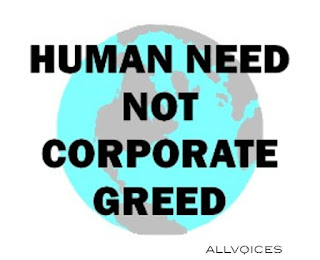