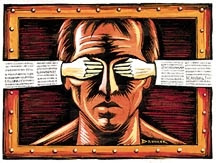 The US fell down the Reporters Without Borders (RWB) annual World Press Freedom Index and is now classed as a “problematic” country for journalists to work in, ranking below the likes of Romania, Chile, and Botswana.
This follows inflammatory comments from the president and a broader hatred of the media which resulted in the shooting of five newspaper staff at the Capital Gazette in Maryland.
Among other issues in the last year, Trump branded several mainstream news outlets the “enemy of the American people”, while political reporters covering the White House have had to seek additional security measures and newsrooms have been repeated targeted with bomb threats.
“If the political debate slides surreptitiously or openly towards a civil war-style atmosphere, in which journalists are treated as scapegoats, then democracy is in great danger,” said RWB’s secretary general, Christophe Deloire. “Halting this cycle of fear and intimidation is a matter of the utmost urgency for all people of goodwill who value the freedoms acquired in the course of history.”
The report’s authors warned the UK remained one of the worst-ranked western European countries “largely due to a heavy-handed approach towards the press, often in the name of national security”.
Among other issues, RWB cited the lack of protections for British journalists and whistleblowers in the government’s new Investigatory Powers Act; the UK’s mass surveillance regime, which was found to violate the European convention on human rights, and new counter-terrorism legislation which critics say puts journalists’ data at risk.
It also highlighted the case of Northern Irish investigative journalists Trevor Birney and Barry McCaffrey who were arrested last year following their reporting on the Loughinisland massacre. The pair had their journalistic materials confiscated, and remain on police bail seven months after being arrested.