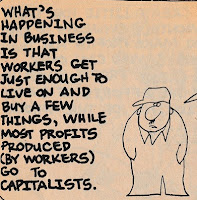 American corporate profits are at 80-plus year highs, and the S&P 500 has broken previous records nearly 30 times in the last five years alone, real wages for the lowest-income workers have barely risen in four decades. And today, nearly half of all workers make less than $15 per hour – roughly $30,000 annually for a full-time job.

Short-termism pervades corporate boardrooms and C-suites, as companies increasingly fixate on delivering immediate value for shareholders at the expense of longer-term investments in wages and training for workers. A 2016 report by FCLT Global found that 87% of executives and directors are pressured to deliver a strong financial performance within less than two years. An earlier study by McKinsey found that nearly 80% of surveyed chief financial officers at America’s largest public companies said that they would sacrifice longer-term economic value in order to meet quarterly earnings expectations.


Illustrative of this trend is the massive wave of stock buy-backs, in which companies, desperate to please shareholders, purchase their own shares in order to reduce supply in the market and drive up their prices. Before 1982, buy-backs were generally considered to be a form of market manipulation, but in the decades since, as a result of a change in federal policy, they have become a staple of corporate decision-making.
According to the economist William Lazonick, between 2007 and 2016 companies on the S&P 500 dedicated 96% of their earnings to stock buy-backs and corporate dividends. That left just 4% for investments in the workforce, like raises for workers.


And, in the wake of the Trump tax bill of 2017, a nearly $2tn giveaway to the largest corporations and wealthiest households, buy-backs surged to record heights, with over $1tn in share repurchases in the last year alone. Meanwhile, workers like ourselves can expect no such boost in our wages.
Firms further exercise their power by embracing anticompetitive practices that keep workers stuck and wages down. Take the proliferation of non-compete agreements, covenants between employer and employee that restrict where the employee can work next. Historically, these agreements have been limited to workers with highly specialized training or possessing trade secrets; today one in seven workers earning less than $40,000 a year reports having signed one – including, until recently, sandwich-makers at Jimmy Johns and line cooks at Burger King. Employers do it because they can.
https://www.theguardian.com/commentisfree/2019/apr/24/workers-are-creating-massive-wealth-why-are-corporations-hoarding-it-all
Posted by ajohnstone at 12:37 am