Lest we forget - Anton Pannekoek 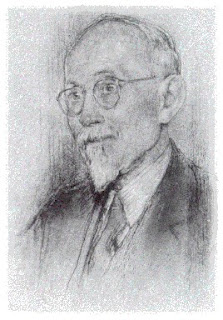 In Wageningen, Netherlands, on April 28, 1960 Anton Pannekoek, (affectionately known as Tony Pancakes as Pannekoek is Dutch for pancake) died at the age of 87 years.

Although mostly forgotten, Pannekoek had been Marxist scholar and activist on par with Karl Kautsky and Rosa Luxenburg, but who was later marginalised and dismissed by the Leninists. Pre-WW1 he was involved in the left radical wing of social-democracy and after the war became a proponent of the council-communist movement.

In later life, Pannekoek found it difficult to have his ideas published and the Western Socialist, the journal of the World Socialist Party of the United States printed a number of his essays. The Socialist Party of Great Britain has issued one of his early writings , Marxism and Darwinism.

Also recommended reading is Pannekoek's Lenin As Philosopher, critique of ‘bourgeois materialism’ by which Pannekoek meant a materialism which seeks to explain everything in terms of physics and chemistry. When the bourgeoisie had to fight to achieve and retain power, said Pannekoek, they believed in the power of the physical sciences to change the world, practically by developing modern industry, and theoretically by exposing the religious views of their class opponents as superstitious nonsense. That Lenin and the Bolsheviks should have adopted a similar ideology to that of the rising bourgeoisie of Western Europe at an earlier period was to be explained, said Pannekoek, by the essentially similar task that confronted them: to carry out the equivalent of a bourgeois revolution in Russia which would sweep away the obstacles, institutional and ideological, to the development of modern industry there. Pannekoek saw Leninism as the ideology of a new ruling class whose historical task was to industrialise Russia on the basis of state capitalism, with militant physical-science materialism as its ideology.

Much of his work is available on the Marxist Archive website.

Pannekoek's ideas were not too far apart from the SPGB as it might first appear. A May 1942 Socialist Standard article summarised Pannekoek's position:

“[Anton Pannekoek] Writing in an American magazine, Modern Socialism, says: 'The belief in parties is the main reason for the impotence of the working-class...Because a party is an organisation that aims to lead and control the workers'.

Further on, however, he qualifies this statement:
'If...persons with the same fundamental conceptions (regarding Socialism) unite for the discussion of practical steps and seek clarification through discussion and propagandise their conclusions, such groups might be called parties, but they would be parties in an entirely different sense from those of to-day'.

The article went on to say that it was not parties as such that had failed, but the form all parties had taken “as groups of persons seeking power above the worker”. Pannekoek wished workers' political parties to be “organs of the self-enlightenment of the working class by means of which the workers find their way to freedom” and “means of propaganda and enlightenment”.

Almost exactly the role and purpose many members of the Socialist Party would ascribe to it.

I would urge people to read the entire article themselves and not rely on AJ's questionable use of quotations ( see ALB's rebuke on the criminal use of a James Joyce observation attributed to Marx on the Forum ).The writer of the article refers to 'so-called intellectuals . Many of these cultivate a cynicism towards the whole question of political action which does not mask, but accentuates their uselessness to the cause of Socialism'. Pannekoek is dismissed for making a 'distinction which does not exist'.
However, to repeat, read the article yourself, and when you have done so -FORGET Anton Pannekoek.

The link to the full article anonymous refers to is

ALB speaker's notes
"...We can envisage a quite different kind of electoral politics: workers, when they have become socialist, organising themselves into a mass, democratic political party on the same basis as Pannekoek envisaged for his “workers’ councils”, i.e. no leaders, only mandated and revocable delegates..."

Also Worth recording what Pannekoek thought of the SPGB

“In the English-speaking world – since Mattick’s Living Marxism ceased – there is no other organ that in criticising all the Labor and socialist ‘reformers’ (really defenders of capitalism) at the same time could show the positive aims of pure class fight. For in England the most radical socialism is the S.P.G.B...”
Anton Pannekoek (Letter to J. A. Dawson, 12 October 1947)

who felt we were overly flattering of Pannekoek and the editors reply to this.

I stand by the blog post that Pannekoek was an ally of the SPGB despite differences and that his definition of a positive political party organization as “organs of the self-enlightenment of the working class by means of which the workers find their way to freedom” and “means of propaganda and enlightenment”.
https://www.marxists.org/archive/pannekoe/1936/party-class.htm

Is exactly how we are organized in the SPGB

His contributions such as the a SPGB published pamphlet on Darwinism, his "Lenin as Philosopher", his introduction to Dietzgen means we should not forget Pannekoek. Nor should we forget that he wrote for the Western Socialist as did the councilist Paul Mattick