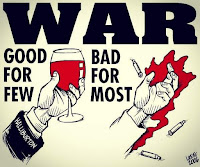 A new study, almost two years of investigations, revealed that the U.S.-led bombing campaign on Raqqa, Syria in 2017 killed an estimated 1,600 innocent civilians while leveling the city on a scale unparalleled in recent decades.

The report, "Rhetoric vs. Reality: How the 'Most Precise Air Campaign in History' Left Raqqa the Most Destroyed City in Modern Times, confirm that the U.S.-led coalition has admitted to just a fraction of the civilian carnage it has caused in Syria, even as it has boasted of the care it's taken in avoiding such casualties and the precision of the Raqqa offensive.


According to the report: "US, UK and French forces also launched thousands of air strikes into civilian neighborhoods, scores of which resulted in mass civilian casualties."

Amnesty and Airwars have identified the shellings that destroyed about 11,000 buildings and the names of more than 1,000 victims. Military leaders have admitted to only 159 civilian deaths during the Raqqa campaign

U.S. Lieutenant General Stephen J. Townswend, commander of the coalition, who said,  "I challenge anyone to find a more precise air campaign in the history of warfare…The Coalition's goal is always for zero human casualties."

Researchers argue the evidence belies those claims and, as part of the report, both groups demanded accountability for what was done to the city and its people.

The U.S. has claimed to have unleashed 30,000 rounds of artillery on the city during the offensive, while the U.K. and France helped to carry out thousands of air strikes. The U.S. strikes represent the equivalent of one strike every six minutes for four months.


Donatella Rovera, a crisis investigator for Amnesty, relates that:


"When I first came to Raqqa after the war, I knew that relentless American, British, and French bombardment killed civilians and destroyed much of the city," Rovera said. "What I came to discover was that little or no protection was afforded to the thousands of civilians who were trapped in the city," she added. "Raqqa is the most destroyed city in modern times in terms of percentage. There is no part of Raqqa which has been left untouched. Many of the air bombardments were inaccurate and tens of thousands of artillery strikes were indiscriminate, so it is no surprise they killed and injured many hundreds of civilians,” said Rovera.

While in Afghanistan, pro-government and international military forces in Afghanistan were responsible for more civilian deaths in the first three months of 2019 than the Taliban and Islamic State-Khorasan militant groups.