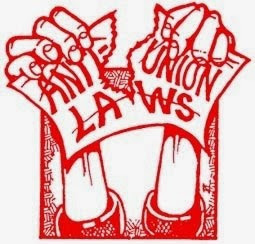 According to figures released Thursday by the Bureau of Labor Statistics (BLS), overall U.S. union membership fell to 10.3% in 2021—down from 10.8% the previous year—even as public approval of unions rose to its highest point in nearly six decades.

Union membership's return to the historically low 2019 level in 2021 came in a year that also saw a number of high-profile strikes and successful organizing drives.

According to Cornell University's Labor Action Tracker, there were more than 360 strikes nationwide over the course of 2021.

One recent report estimated that the erosion of union membership cost the median U.S. worker $3,250 per year between 1979 and 2017.

The percentage of U.S. workers belonging to a union has been steadily declining for decades as corporate America and its right-wing allies in government—as well as in the judiciary—have waged a coordinated assault on organized labor, a campaign that has included so-called "right-to-work" laws and other anti-union measures.

Posted by ajohnstone at 9:07 am