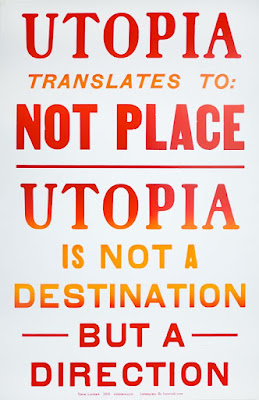 “Revolutions must take place in the mind before they can be carried out on the streets.”

“The new social organism cannot be the work of one single person, nor of a few people…It is the work of everyone…The river thus slowly takes shape from the confluence of a thousand springs, of billions of drops of water.”

“Schools, books, the printed word – these are the real revolutionary agents...teachers are the only true revolutionaries.”

The continuing pandemic, the endless wars, the persistent poverty and the deepening ecological cataclysms should not offer socialists very much hope that change is coming. But we shall not cease our campaign to end capitalism and bring about socialism. We do still possess hope that working people can build a better world for the common good and the well-being of all. We cannot go on the way we are going. People will eventually come to understand that and will avert the dystopian future scenarios sci-fi writers’ careers have flourished upon.

We are confident that our fellow workers who puzzle over the question of why when our technology can produce so much, how is it that we ourselves get so little? Eventually, workers will ask if we produce a thousand-fold more social wealth than our great-grandfathers could why is it we still suffer from scarcity.

Socialists are convinced that in due time, the working class will come to the conclusion that the reasons are the world’s great productive system is owned by a handful of people who run it for their own profit and not for people’s use. And it can only operate in the interests of everybody when society as a whole collectively owns and runs it.

Most people know the present system is rotten and harmful by their own experience of economic insecurity. But they still have not arrived at the socialist answer. The answer will not be reached through hopelessness and despair but by mankind’s reasoning process. As the capitalist system continues on its road towards chaos and civilisation collapse, our need for solidarity and resistance will only increase. The means of production will be taken over by the communities and re-purposed for human needs. The enormous reservoir of talent and creativity will be released to build a new world. The knowledge and resources are there to be applied.

For socialists, our future task is largely a question of whether we can begin engaging the union movement, the social movements, and radicals in challenging capitalism. We have to be able to argue that capitalism is bad even when it is working well, that capitalism is now a barrier to human development.  We need to recognise that we're fighting capitalism. What socialists have to offer is making connections between working people across workplaces, across countries, bringing a class analysis so they understand it’s not just them. We can never win if it’s just a few of us against the State. Fellow workers have to see there’s actually a class and offer them some historical memory, so they see how workers did in the past. Giving them some comparative analysis of what’s going on — how did people organise. Our policy is to be a bridge—responding to practical and immediate things, but putting them into a larger context. Because without that larger context we’re losing and we’re going to continue to lose.

The social revolution we are calling for is a simple thing. It is the devolution of all power into the hands of the working people. It is bottom-up, industrial democracy, with decision-making power being exclusively the prerogative of workers in their workplaces and communities, confederated one to another in such ways as they see fit. The social revolution is the full and final emancipation of labour, all labour. Revolution, real revolution, is affected by the workers themselves.

Given the conscious control of human affairs that a socialist system would implement, people in socialism would be able to take charge of their destiny. What is undeniable is that we are a species with great talents. In science, technology, art, crafts and design we can call upon a wide range of great skills. The point now is to carry out the revolution for the benefit of humanity and a new era for humanity will have begun.