“What good is having the right to sit at a lunch counter,” Martin Luther King Jnr is widely quoted as asking, ​“if you can’t afford to buy a hamburger?”

As Black History Month approaches, the blog is not trying to claim MLK as one of its own. We merely wish to draw attention to the fact that he recognised that socialism is required for the deeper solutions to the inequalities facing working people, especially the African-Americans of the United States.

In 1952 a 23-year-old Martin Luther King Jr. as a first-year undergraduate at Boston University of Theology described his views toward America’s economic system. ​“I am much more socialistic in my economic theory than capitalistic,” he admitted to his then-girlfriend, concluding that ​“capitalism has outlived its usefulness.” He explained capitalism ​“has brought about a system that takes necessities from the masses to give luxuries to the classes.”

15 years later in his  book, Where Do We Go From Here: Chaos or Community?, his opinion remained the same: ​“Capitalism has often left a gap of superfluous wealth and abject poverty and has created conditions permitting necessities to be taken from the many to give luxuries to the few.”

In his 1967 Riverside Church speech, King included in his sermon the observation: ​“When machines and computers, profit motives and property rights are considered more important than people, the giant triplets of racism, materialism and militarism are incapable of being conquered.”

Speaking to the staff of the Southern Christian Leadership Conference (SCLC)  in 1966, King said that ​“something is wrong … with capitalism” and ​“there must be a better distribution of wealth” in the country. ​“Maybe,” he suggested, ​“America must move toward a democratic socialism.”

In an interview with the New York Times in 1968, King described his work with the SCLC as ​“In a sense, you could say we are engaged in the class struggle.”

In Where Do We Go From Here, he outlines how economic inequality can circumscribe civil rights. While the wealthy enjoy easy access to lawyers and the courts, ​“the poor, however, are helpless.”

In Where Do We Go From Here, MLK called the victories of the movement up that point in 1967 ​“a foothold, no more” in the struggle for freedom. Only a campaign to realize economic, as well as racial justice, could win true equality for African-Americans. In naming his goal, King was unflinching: the ​“total, direct, and immediate abolition of poverty.”

He pointed out that in the USA, we ​“compress our abundance into the overfed mouths of the middle and upper classes until they gag with superfluity,”

MLK's project, the Poor People’s Campaign, shows his dream included a future of both racial and economic equality. In King’s words, as soon as he demanded ​“the realization of equality” — the second phase of the civil rights movement — he discovered white liberal 'middle class' suddenly indifferent.

The Forgotten Socialist History of Martin Luther King Jr. - In These Times 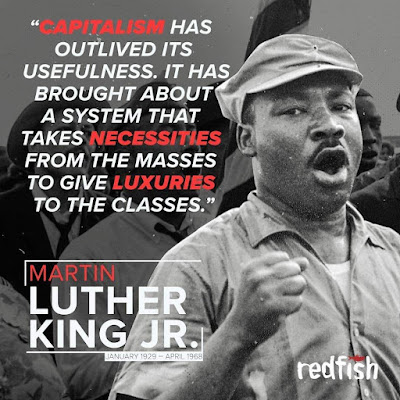 Posted by ajohnstone at 8:52 am