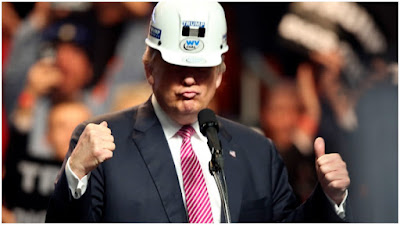 Donald Trump still struts on the American political scene. It seems probable that he will stand again for president in 2024. This article considers one important aspect of his popular appeal – his ‘blue-collar’ image.

In 2018 a book appeared entitled Trump, The Blue-Collar President. The author, financier Anthony Scaramucci, who served as the White House Director of Communications in July 2017, highlights the absurdity of the image he himself helped create by crowning ‘the Billionaire Blue-Collar President.’ Not for a single day has Trump ever been a blue-collar or even a white-collar worker. His only work experience before entering politics was as a dealer in real estate. In office he consistently pursued policies extremely favorable to business and the wealthy.

And yet Trump did to some extent succeed in creating an image of himself as a friend of blue-collar workers. How did he perform this astonishing feat?

One thing he did that helped enormously was tapping into the long American tradition of anti-intellectualism. Let me explain how this works.

Life as a wage-slave – the humiliation of abject dependence on an employer, the unfree nature of work for a boss, the unending struggle to make ends meet, the pressure of competition – is bound to generate suppressed or open feelings of resentment, anger, and hostility. Politicians and propagandists for the capitalist class strive to prevent such feelings from striking home against their masters by redirecting them toward other targets.

A variety of substitute targets are available. Foreign powers are an old standby, as are ethnic, racial, and religious minorities. In a previous article I discussed the retargeting of hostility against welfare recipients or ‘the poor,’ pictured as feckless parasites living off a hardworking ‘middle class.’ Another substitute target much favored by ‘right-wing’ demagogues is people with higher education, academics, and intellectuals, often lumped together as ‘the liberal intellectual elite’ (obscuring the existence of conservative intellectuals).

Richard Hofstadter, author of a classical study of anti-intellectualism in the United States,[1] speaks of ‘the traditional businessman’s suspicion of experts working in any area outside his control, whether in scientific laboratories, universities, or diplomatic corps.’ In fact, capitalists exert a considerable degree of control even in these spheres: over universities, scientific institutes, and many other organizations by means of financial support and seats on boards of trustees, over diplomacy by means of participation in closed forums like the Council on Foreign Relations. But no doubt anything less than complete and direct control causes them some discomfort. They are fully conscious of themselves as a ruling class, and whatever is outside their control is a potential threat to their position.[2]

One anomaly in the position of the capitalists is that despite their enormous economic and political power they do not monopolize social status or prestige, which can also be won through achievement in science or the arts.[3] In some ways this is a weakness, but it enables capitalists to retarget popular resentment against intellectual and cultural elites that they view as potential rivals.

Is it not a bit risky for members of one extremely wealthy and powerful elite to play the card of anti-elitism against other elites? Might it not suggest questions about their own anti-elitist credentials? Apparently not.

In general, lies are more convincing when they contain a grain of truth. Thus, some welfare recipients do obtain benefits by means of fraud, although their sponging hardly bears comparison with the gross parasitism of the capitalists who denounce them. Here again, the scapegoating of intellectuals works because the poorly educated do have grounds to resent those more highly educated than themselves. They are resented for their pretensions of cultural, intellectual, and moral superiority, because they look down on people who lacked their own educational opportunities. At best they feel patronized, at worst they are mocked and ridiculed. This may hurt even more than economic exploitation.

The special appeal of Donald Trump to the poorly educated has been analyzed in these terms by Janet McIntosh.[4] She criticizes commentators who mock Trump’s style because it lacks polish and is marked by disorganized syntax, spelling and grammatical mistakes, idiosyncratic use of punctuation and capital letters, limited vocabulary, and overuse of intensifiers [words like ‘very’].

Such mockery evokes sympathy for Trump among poorly educated voters, who may remember being ridiculed for similar stylistic shortcomings by sarcastic schoolteachers.

This brings us to another reason why Trump was able to create a ‘blue-collar’ image for himself. The sole alternative to Trump and the Republicans offered by the two-party electoral system and the corporate media is the Democratic Party establishment, represented – as McIntosh notes – by ‘liberal politicians like Hillary Clinton,’ who ignore ‘the economic grievances, wage insecurity, and working and housing conditions’ of workers, especially white workers, thereby driving them into the Trump camp.

Of course, there are other voices, outside the establishment, ours among them, that do not ignore the problems faced by workers. But these voices are excluded from the mass media and are rarely if ever heard by the majority of Americans. The far-reaching alternatives that they offer do not appear ‘practical’ or ‘realistic.’

This problem is exacerbated by the rise of the trend known as ‘identity politics’ and its speech code of ‘political correctness.’ This trend concerns itself with several kinds of social injustice – above all, racism, sexism, the oppression of sexual minorities, and prejudice against the handicapped. The set of issues addressed has expanded over time and will probably continue to do so. An attempt is made to combine the various issues in accordance with the principle of ‘intersectionality.’

Matters of class, however, receive little attention in identity politics. At best, ‘classism’ is tagged on at the end of a list that starts with racism and sexism and includes heterosexism, able-ism, age-ism, and so on, without recognizing that class is central to the whole structure of social inequality, the grid on which other forms of inequality are measured. Usually, however, class is ignored altogether, producing a grotesquely distorted view of society, as when a destitute white heterosexual man is considered more privileged than a wealthy black lesbian. At worst, identity politics merges with the dominant culture in the worship of capitalist ‘success’ and idolization of black, female, and gay celebrities who have ‘made it.’

Many blue-collar workers share Trump’s scornful rejection of ‘political correctness.’ As McIntosh puts it, they feel offended when ‘hyper-educated liberals’ assume that they are prejudiced against nonwhites, women, or gays just because they ‘do not know the new lingo and have not cultivated exquisite verbal sensitivity.’

Effective opposition to demagogues like Trump will never come from the ‘liberal left’ of the Democratic Party establishment and its tame media, but only from a movement that offers the working class a real alternative to capitalism.

[1] Anti-Intellectualism in American Life, first published in 1966. The most recent edition was released by Vintage in 2012.

[2] However, the anti-intellectualism of ‘the traditional businessman’ is not shared by high-tech entrepreneurs, who are highly educated and may fear that they themselves will become targets of anti-intellectual demagogy.

[3] Academic honors are more prestigious in some countries than others (more in Germany than in the United States, for instance).