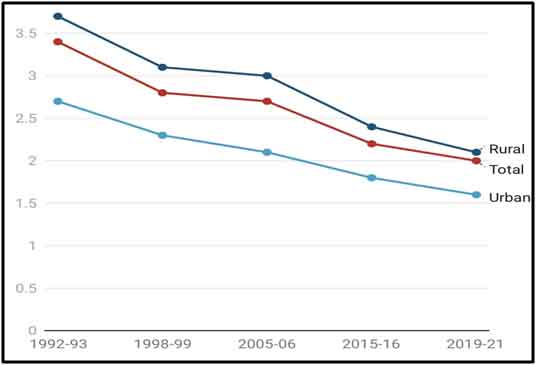 The World Health Organisation(WHO) describes the Total Fertility Rate as the average number of children born to a woman “at the end of her reproductive period”. Replacement level fertility is the level of fertility at which a population exactly replaces itself from one generation to the next. One couple replaces two children, if a couple has more than two children then it will lead to rapid population growth. With less than two children, the population will certainly increase, but at a declining rate.

Only five states of the country, Bihar (3.0), Meghalaya (2.9), Uttar Pradesh (2.7), Jharkhand (2.4), and Manipur (2.2) have recorded relatively high fertility rates and this is also above the replacement rate. The positive side is that it is lower than the last National Family Health Survey.

In 1950, the fertility rate in the country was 5.90 which meant that there was an average of 6 children in a household.

According to a study published in the journal Lancet, if India’s fertility rate continues to decline at the current rate, after 80 years from now (by the end of the century) the country’s population might shrink to 1billion, equal to the population of many countries. The study also found that by then, the fertility rate would have dropped from 2.0 to 1.27.