The World Inequality Report, an exhaustive summary of worldwide income and wealth data that shows inequities in wealth and income are "about as great today as they were at the peak of Western imperialism in the early 20th century."

"Indeed, the share of income presently captured by the poorest half of the world's people is about half what it was in 1820, before the great divergence between Western countries and their colonies," the report notes. "In other words, there is still a long way to go to undo the global economic inequalities inherited from the very unequal organization of world production between the mid-19th and mid-20th centuries."

In the nearly three decades since 1995, members of the global 1% have captured 38% of all new wealth while the poorest half of humanity has benefited from just 2%.

"In the U.S., the return of top wealth inequality has been particularly dramatic, with the top 1% share nearing 35% in 2020, approaching its Gilded Age level," states the report, whose contributors include prominent economists Thomas Piketty and Gabriel Zucman. "In Europe, top wealth inequality has also been on the rise since 1980, though significantly less so than in the U.S."

At present, the richest 10% of the world's population grabs more than half of all global income, the researchers found. The billions of people in the poorest half of the global population, meanwhile, get just 8% of the world's income. 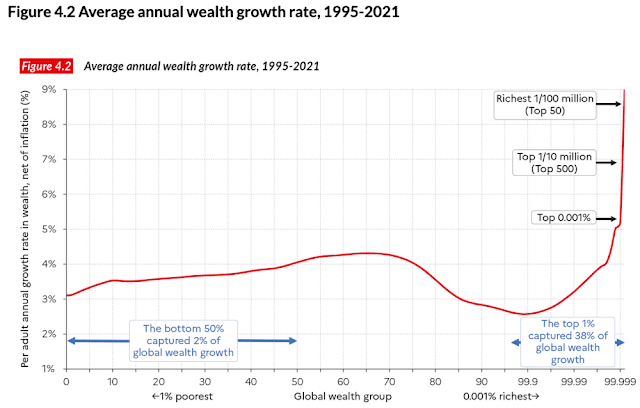