The rich get richer, the poor get poorer 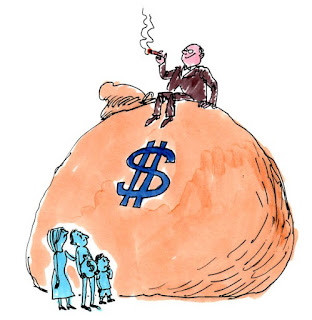 100 million people sank into extreme poverty in 2020 while the increase in billionaires' wealth has been the highest on record.

The richest 10% of the population now takes 52% of global income and the poorest half just 8%.

The report concluded that:

The researchers found that the world's 52 richest individuals saw the value of their wealth grow by 9.2% per year for the past 25 years, well above less wealthy social groups.

Lucas Chancel, co-director of the World Inequality Lab, based at the Paris School of Economics, explained, "While the wealth of billionaires rose by more than €3.6tn (£3tn), 100 million more people joined the ranks of extreme poverty."

The oil, gas and metals merchant Trafigura will reward its top traders and executives with bonus payouts worth more than £1bn after making record profits from the market upheaval during the Covid pandemic. At £1.1bn, the rewards are 87% up on last year.

Oil trading company Vitol, which handed the equivalent of more than $8m to each of its 350 most senior staff.

Posted by ajohnstone at 5:06 pm