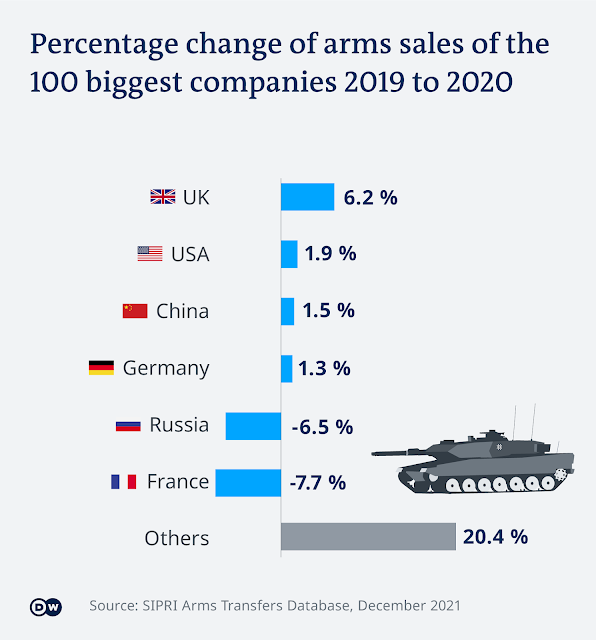 Stockholm International Peace Research Institute (SIPRI) in a new report shows that the world's top 100 arms producers have continued to increase sales — even in the pandemic year of 2020 and despite the global economy contracting. Lockdowns, crumbling supply chains, jittery consumers: The COVID-19 pandemic has brought about massive economic slumps around the world. One sector, however, has proved immune to the virus: The arms industry.

The sales of the top 100 arms manufacturers totalled $531 billion (€469 billion) in 2020, more than the economic output of Belgium. Some 54% of this was accounted for by the 41 US companies in SIPRI's top 100. The main companies in the industry are US-based: Lockheed Martin alone sold more than $58 billion worth of weapons systems last year —  a sum bigger than the GDP of Lithuania.

Markus Bayer, a political scientist at the Bonn International Centre for Conflict Studies (BICC), says arms companies are deliberately exerting influence. He quotes a report by the US NGO Open Secrets: "Defense companies spend millions every year lobbying politicians and donating to their campaigns. In the past two decades, their extensive network of lobbyists and donors have directed $285 million in campaign contributions and $2.5 billion in lobbying spending to influence defense policy."

SIPRI researcher, Alexandra Marksteiner, explains that the US Department of Defense provided targeted support for the arms industry during the pandemic. "For example, they made sure that employees of defense companies were largely exempted from stay-at-home orders. On the other hand, there were some orders that were set up so that funds could be transferred to the companies a bit earlier, ahead of schedule, so that they would have a bit of a buffer."

Simone Wisotzki, an arms control expert at the Peace Research Institute Frankfurt (PRIF), was especially struck by "the fact that arms companies from the Global South are becoming increasingly important." Wisotzki mentions India in particular: It has three companies in the top 100, whose combined sales total 1.2% — on a par with South Korea.

However, there are far more weapons leaving the factories of India's northern neighbour, China. SIPRI has been including Chinese companies in its studies since 2015, despite the many problems with transparency. China's five companies on the list are benefiting from the Chinese military's modernization program, and their shipments now account for 13% of the top 100's sales.

Simone Wisotzki also notes that the boundary between civil and military technologies are becoming increasingly blurred. "Information technology can no longer be separated from weapons technology,"

SIPRI gives the example of a deal between Microsoft and the US Department of Defense worth $22 billion. The company has been contracted to supply the US Army with a type of super-glasses, called the Integrated Visual Augmentation System, which will provide soldiers with real-time strategic information about the battlefield.

The US military's interest in Silicon Valley is easy to explain. "They realize that, in these new enabling technologies, be it artificial intelligence or machine learning or cloud computing, these Silicon Valley companies' expertise is far beyond what you would see from traditional arms industry players," says Marksteiner. "There is a chance that some of these companies will actually end up entering the [SIPRI] top 100." 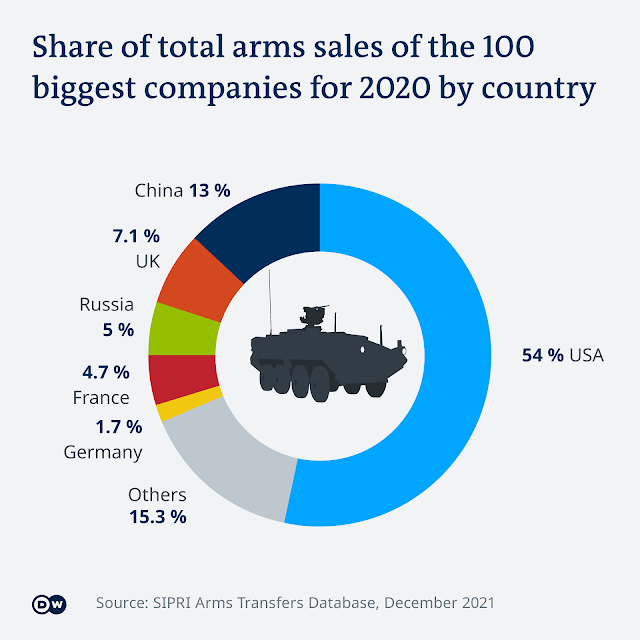