Hunger and the Food Industry

Even before the current pandemic, millions of people in the U.S. went hungry.

In 2019 the U.S. Department of Agriculture estimated that over 35 million people were “food insecure,” meaning they did not have reliable access to affordable, nutritious food. Now food banks are struggling to feed people who have lost jobs and income thanks to COVID-19.

As unemployment has risen during the pandemic, so has the number of hungry Americans. Feeding America, a nationwide network of food banks, estimates that up to 50 million people – including 17 million children – may currently be experiencing food insecurity. Nationwide, demand at food banks grew by over 48% during the first half of 2020.

Through 2020, consumer food costs rose by 3.4%, compared to 0.4% in 2018 and 0.9% in 2019.  Research shows that retail concentration correlates with higher prices for consumers. It also shows that when food systems have fewer production and processing sites, disruptions can have major impacts on supply.  In 2020 Christopher Lischewski, the former president and CEO of Bumblebee Foods, was convicted of conspiracy to fix prices of canned tuna. He was sentenced to 40 months in prison and fined US$100,000. In the same year, chicken processor Pilgrim’s Pride pleaded guilty to price-fixing charges and was fined $110.5 million. Meatpacking company JBS settled a $24.5 million pork price-fixing lawsuit, and farmers won a class action settlement against peanut-shelling companies Olam and Birdsong.

Industry consolidation is hard to track. Many subsidiary firms often are controlled by one parent corporation and engage in “contract packing,” in which a single processing plant produces identical foods that are then sold under dozens of different brands – including labels that compete directly against each other.

Recalls ordered in response to food-borne disease outbreaks have revealed the broad scope of contracting relationships. Shutdowns at meatpacking plants due to COVID-19 infections among workers have shown how much of the U.S. food supply flows through a small number of facilities.

With consolidation, large supermarket chains have closed many urban and rural stores. This process has left numerous communities with limited food selections and high prices – especially neighborhoods with many low-income, Black or Latino households.

Consolidation makes it easier for any industry to maintain high prices. With few players, companies simply match each other’s price increases rather than competing with them. Concentration in the U.S. food system has raised the costs of everything from breakfast cereal and coffee to beer.

Disruptions in food supply chains forced farmers to dump milk down the drain, leave produce rotting in fields and euthanize livestock that could not be processed at slaughterhouses. Between March and May of 2020, farmers disposed of somewhere between 300,000 and 800,000 hogs and 2 million chickens – more than 30,000 tons of meat.

A few months into the pandemic, meat shelves in some U.S. stores sat empty, while some of the nation’s largest processors were exporting record amounts of meat to China. U.S. Senators. Elizabeth Warren, and Cory Booker, cited this imbalance as evidence of the need to crack down on what they called “monopolistic practices” by Tyson Foods, Cargill, JBS and Smithfield, which dominate the U.S. meatpacking industry.  Store shelves are no longer empty for most cuts of meat, but processing plants remain overbooked, with many scheduling well into 2021. 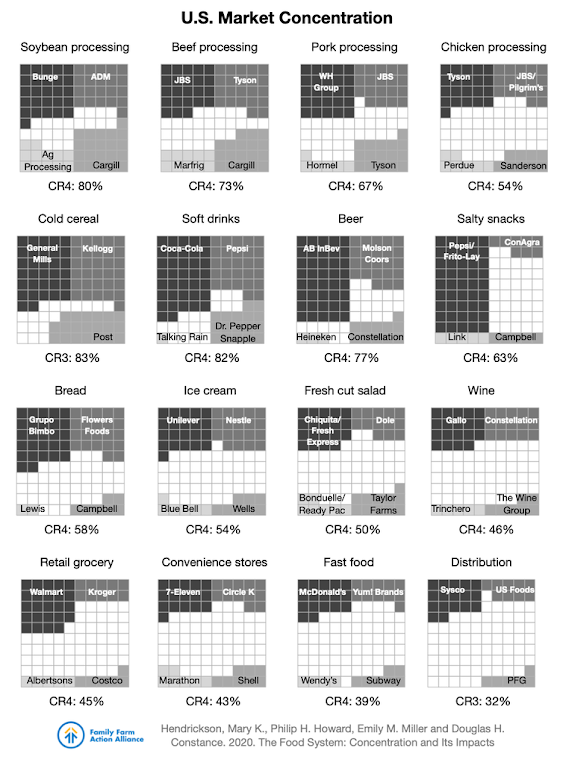 Posted by ajohnstone at 2:16 am