$50 trillion , that is how much the upward redistribution of income has cost American workers over the past several decades, according to a new working paper by Carter C. Price and Kathryn Edwards of the RAND Corporation.

Had the more equitable income distributions of the three decades following World War II (1945 through 1974) merely held steady, the aggregate annual income of Americans earning below the 90th percentile would have been $2.5 trillion higher in the year 2018 alone. That is an amount equal to nearly 12 percent of GDP—enough to more than double median income—enough to pay every single working American in the bottom nine deciles an additional $1,144 a month. Every month. Every single year.

Price and Edwards calculate that the cumulative tab for the US four-decade-long inequality had grown to over $47 trillion from 1975 through 2018. At a recent pace of about $2.5 trillion a year, that number we estimate crossed the $50 trillion mark by early 2020.

America’s inequality is old news. Many other studies have documented this trend. The RAND report brings the inequality price tag directly home by denominating it in dollars—not just the aggregate $50 trillion figure, but in granular demographic detail.

For example, are you a typical Black man earning $35,000 a year? You are being paid at least $26,000 a year less than you would have had income distributions held constant.

Are you a college-educated, prime-aged, full-time worker earning $72,000? Depending on the inflation index used (PCE or CPI, respectively), rising inequality is costing you between $48,000 and $63,000 a year.

At every income level up to the 90th percentile, wage earners are now being paid a fraction of what they would have had inequality held constant.

According to Oren Cass, executive director of the conservative think tank American Compass, the median male worker needed 30 weeks of income in 1985 to pay for housing, healthcare, transportation, and education for his family. By 2018, that “Cost of Thriving Index” had increased to 53 weeks (more weeks than in an actual year). But the counterfactual reveals an even starker picture: In 2018, the combined income of married households with two full-time workers was barely more than what the income of a single-earner household would have earned had inequality held constant. Two-income families are now working twice the hours to maintain a shrinking share of the pie, while struggling to pay housing, healthcare, education, childcare, and transportations costs that have grown at two to three times the rate of inflation. 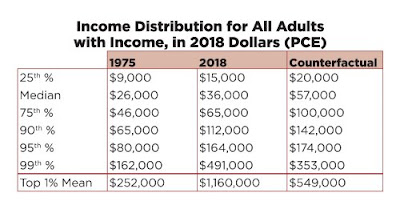